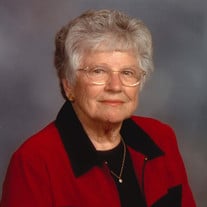 Wylodene C. Baughman, age 95, passed away on November 28, 2020. Born October 3, 1925, in Liberty Township, Henry County, Ohio, the daughter of Glenn and Vera (Kitter) Frysinger. Wylodene graduated from Liberty Center, Ohio in 1943 where she was very active in high school. On April 28, 1946, she married Theodore (Ted) Baughman and he preceded her in death on January 13, 1992. In her early years she worked at the LS. Dunbar Co. as a bookkeeper. After marriage Wylodene and Ted built a successful farm operation, raising their family to appreciate the rural lifestyle. She was a loving mother, grandmother, great grandmother, sister, and friend. She enjoyed watching sports on TV, reading, and following all the activities of her family. She and Ted enjoyed traveling and always ready to dine out with friends. The family fondly remembers all the pond parties hosted at the heart-shaped pond in their back yard. Many winters were spent at their winter home in Venice, Florida. Wylodene was a lifetime member of St. Paul United Methodist Church, Napoleon, where she was active in her younger years. Surviving are her children, Peggy (Phil) Johnson, Tom (Joan) Baughman, Napoleon; grandchildren, Christy (Charles) Eberle, Napoleon, Corie (Jared) Kline, Cincinnati, Ryan (Makenna) Johnson, Painesville, Sarah (Kyle) Shepard, Napoleon, Becky (Ryan) Gardenhire, Nashville, TN, Mary (Joe) Driskill, Lyman, SC, and Todd Baughman, Grand Rapids, 0H, Troy (Jen) Baughman, Dexter, MI, Kelly Campos, Napoleon; daughter-in-law, Gayla Baughman, Napoleon; 20 great grandchildren; and sister, Jeanette Harms, Napoleon. In addition to her parents, she was preceded in death by her husband, Ted; son, Steve Baughman; brothers, Doyle, Weldon, Burdette and Delmar Frysinger; and sister, Dorothy Dunbar. Friends and family will be received at the Rodenberger-Gray Funeral Home, Napoleon on Wednesday, December 2, 2020 from 10:00 AM until the time of services at 1:00 PM. Interment will be private. Memorial contributions may be made to St. Paul United Methodist Church, Napoleon, Genacross Lutheran Services, Napoleon Campus, or a charity of the donor's choice. Online messages and condolences may be shared with the family at rodenbergergray.com. Due to the current health conditions surrounding COVID-19, masks will be required to attend services or visitation in accordance with the State. Please also respect social distancing and make use of the website to contact the family if you are not feeling well.

The family of Wylodene C. Baughman created this Life Tributes page to make it easy to share your memories.

Send flowers to the Baughman family.