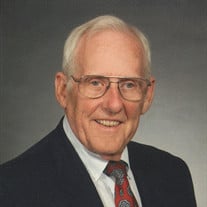 William “Bill” Frederick Rohrs, 86, of Napoleon, Ohio, went to be with the Lord Friday December 26, 2020 due to complications with Covid-19. He was born October 7, 1934, in Malinta, Ohio, the son of Frank and Emma (Witte) Rohrs. He was the youngest of 10 siblings. On July 19, 1958 he married Irmgard Badenhop. Bill was baptized on October 23, 1934 by Pastor G.J. Ide and confirmed March 21, 1948 by Pastor A. J. Boomgarden at Hope Lutheran Church, Hamler Ohio. Confirmation verse -- Psalm 27 – “The Lord is my light and my salvation; whom shall I fear? The Lord is the strength of my life; of whom shall I be afraid? Bill graduated from Malinta-Grelton High School in 1952. He received a Bachelor of Science Agriculture Education graduating from The Ohio State University in 1956. In 1973, he received a Master of Education from Michigan State University. Bill was a Vocational Agriculture Instructor in the Auglaize Brown Local School District from 1956 until 1967. In 1967, he went to work for The Ohio State University as a Defiance County Extension Agent- 4-H Program later on taking the roll as Agricultural Agent, retiring in 1987 with the rank of Associate Professor. From 1998 to 2004, he served as Coordinator for the NW Ohio Conservation Action Project. Bill was a faithful and active member of St. Paul Lutheran Church, Napoleon, where he served on the Board of Elders, Endowment Fund and sang in the choir. Prior to moving to Napoleon, he was a member of St. John Lutheran Church, Defiance serving on the Board of Elders, School, Stewardship and Parish Education. He also was the PTL President and sang in the choir. Bill served on the City Tree Commission in Defiance and Napoleon and on the Lake Erie Protection Fund. Bill leaves to cherish his memory wife of 62 years, Irmgard of Napoleon, Ohio; sons Steve Rohrs (Jona) of Akron, Ohio and Roger Rohrs of Perrysburg, Ohio; grandchildren Brittany Haught (Brett) and Julie Wheeler (Kavaughn) of Akron, Ohio; Emma, Ashley, and Claire Rohrs all of Perrysburg, Ohio; and great-grandchildren Phillip Wallace III, Sydney Wheeler and Cora, Cooper and Chase Haught all of Akron, Ohio. Proceeded in death by his daughter Terri Sue; parents Frank and Emma Rohrs; and siblings Walter Rohrs (Lora), Edna Meyer (Fred), Arthur Rohrs (Hilda), Esther Hahn (Otto), Frank Rohrs (Jeanne), Paul Rohrs (Margaret), Marian Fitzenreiter (Arnold), Martin Rohrs (Rozella) and Christine Kruse (Donald). A private service for the family will be held at St. Paul's Lutheran Church on Thursday, December 31 and will be livestreamed at 11 am at www.stpaulnapoleon.org. Burial will be at Riverview Memory Gardens. For those who wish, memorials may be given to St. Paul Lutheran Church, 1075 Glenwood Avenue Napoleon, Ohio 43545, or a charity of your choice. The family wishes to thank the doctors and nurses at St. Vincent Hospital and Henry County Hospital in Napoleon for the love, compassion and care provided to Bill.

The family of William F. Rohrs created this Life Tributes page to make it easy to share your memories.

Send flowers to the Rohrs family.