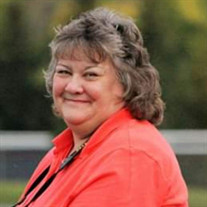 Tralene “Tra” Wiechers, 65, of Napoleon, Ohio passed away on December 20, 2019 surrounded by family. She was born on October 10, 1954 in Havre, Montana. On June 5, 1981 she married Keith Wiechers. Tra was very active in the Fulton County Relay for Life, having served as the Luminaria Chair for 15 years and the 2018 Honorary Chair. She enjoyed RV trips out west with Keith and the grandchildren. She devoted most of her free time to scrapbooking, annual birthday shopping with the grandkids, annual Frankenmuth Christmas shopping with the extended family, and cheering on her grandchildren at their numerous sporting events. She had a way of making every holiday party all about the grandkids and made sure they knew just how important they were to her. She never knew a stranger and her human kindness was truly overflowing. She is survived by her husband, Keith; children, Jason (Hope) Shilling of West Unity; and Christa (Mark) Burken; Kristan (Scott) Norden; Sandy (Jason) Bostleman; Sandi (Tommy) Naas and Keith (Keisha) Wiechers, all of Napoleon; grandchildren, Alan, Clay, Chandler, Joe, Morgan, Evan, Sam, Dan, Abby, Carter, Jordan, Meaghan, Sarah, Landin, Cameron, Kohen, Scarlet, Zachary, and Benjamin; honorary grandchildren, Logan, Dylan, and Audrey; brother, Ric (Susie) Beals of Cut Bank, Montana; and sister, Shauna Beals of Spencerville, Indiana. She was preceded in death by her parents, Darrell and Roberta (Hader) Beals. A Memorial service will be held at 11 a.m. on Monday, December 30th at Rodenberger-Gray Funeral Home, Napoleon. Memorial gathering will be held on Sunday, December 29th from 2-7 p.m. at the funeral home. Memorials are suggested to Sara’s Garden/New Horizons Academy where her grandson attends school.

The family of Tralene "Tra" Wiechers created this Life Tributes page to make it easy to share your memories.

Send flowers to the Wiechers family.