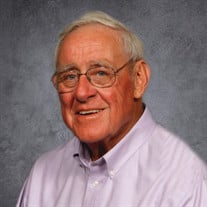 Theodore W. Bostelman, 79, of Napoleon, Ohio passed way on Saturday, August 31, 2019 surrounded by his family. He was born on September 29, 1939 in Napoleon to Theodore and Alma (Damman) Bostelman. Ted was a member of St. Paul Lutheran Church, Napoleon, where he served as an Elder. He worked for Dinner Bell for over 30 years and was a lifetime grain and livestock farmer. Ted was a longtime supporter of the 4H clubs and was inducted into the 4H Hall of Fame. He was a member of the Maumee Valley Retired Iron Club and enjoyed restoring and collecting antique tractors. Ted enjoyed following the Ohio State Buckeyes and the NY Yankees. His greatest joy was watching the grandkids sporting events and cheering on the Wildcats. Ted is survived by his loving wife of 54 years, Margery; children, Ted (Patty); Dwight “Ike” (Heather) and Marcia (Bob) Gobrogge; grandchildren, Curtis (Cagney) Bostelman; Sophia Bostelman; Nicole Bostelman, Benjamin Bostelman and Seth Gobrogge; great grandchildren, Cash and Ridge Bostelman and Bronson, Taelor and Corbin Baden. Also surviving are siblings, Fran Behrman and Wilbert (Ida) Bostelman; and in-laws, Dick (Elaine) Mahnke. In addition to his parents, he was preceded in death by his in-laws, Raymond Behrman and Kenny (Rita) Behrens. Friends and family will be received at the Rodenberger-Gray Funeral Home on Thursday, September 5, 2019 from 2PM until 8PM. Visitation will continue on Friday, September 6, 2019 at St. Paul Lutheran Church, Napoleon from 10AM until the time of services at 11AM. Interment to follow at St. John Cemetery. In lieu of flowers, memorial contributions may be made to the church. Online messages and condolences may be shared at rodenbergergray.com

Theodore W. Bostelman, 79, of Napoleon, Ohio passed way on Saturday, August 31, 2019 surrounded by his family. He was born on September 29, 1939 in Napoleon to Theodore and Alma (Damman) Bostelman. Ted was a member of St. Paul Lutheran Church,... View Obituary & Service Information

The family of Ted Bostelman created this Life Tributes page to make it easy to share your memories.

Send flowers to the Bostelman family.