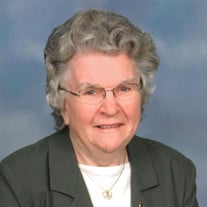 Susanne E. Thayer, 91, of Napoleon, Ohio died Tuesday, October 16th, 2019 at the Napoleon Lutheran Home – Genacross. She was born June 23, 1928 in Hamler, Ohio to the late William and Nora (Hayes) Gluss. On May 29, 1948 she married Burdette Thayer in Hamler, Ohio and he preceded her in death in 1982. Sue was a homemaker and worked as a seamstress for Jackson’s Deluxe Cleaners for over 30 years. She was a member of St. Augustine Catholic Church, Napoleon, where she was a former member of the Rosary Altar Society. She was an avid reader and enjoyed sewing, embroidery, and gardening. She is survived by her children, Richard (Susan) Thayer, Timothy (Laurie) Thayer, and Ann Thayer, all of Napoleon; grandchildren, Lisa Thayer of Napoleon, Jessica (Randy) Jewell of Indianapolis, IN and Jacob Thayer of Franklin, IN; and great grandson, James Jewell. She was also preceded in death by a son, Stephen Thayer; and siblings, Mary Katherine McClinley and William Gluss. A mass of Christian burial will be held on Saturday, Oct. 19 at 10:30 a.m. at St. Augustine Catholic Church. Interment will follow at the church cemetery. Visitation will be held on Friday from 2-8 p.m. at Rodenberger-Gray Funeral Home, Napoleon, where a scripture service will be held at 7 p.m. Memorials may be directed to St. Augustine Catholic Church or a charity of the donor’s choice. Online condolences may be made at www.rodenbergergray.com.

The family of Susanne Elizabeth Thayer created this Life Tributes page to make it easy to share your memories.

Send flowers to the Thayer family.