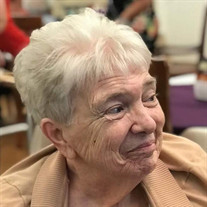 On November 1, 2019, Susan Lucille Hernandez lost her valiant battle with dementia at the age of 76. Sue was born in Napoleon, Ohio on May 12, 1943 to William and Jeannette (Kenning) Wiechers. She graduated from Napoleon High School in 1961 and graduated from Wartburg College in Iowa with a teaching degree. Sue taught in Woodville, Ohio; Napoleon, Ohio and also Freeport, Bahamas. Sue met and married Louis Hernandez in the Bahamas. They later moved to Puerto Rico where they had their first child. A year later, they moved back to Napoleon where Sue raised her two children and later worked at JC Penney catalog store and teaching in the Napoleon school system. She retired in 2008. Sue is survived by her daughter Eileen (Tony) Boellner of Delta, Ohio; son, Stephen (Ana Villalpando) Hernandez of Geneva Switzerland; son, Edgar (Christie) Hernandez; grandsons, Kaiden and Cristóbal; granddaughter, Becky (Roy) and great granddaughter, Serena; sister, Jan (Bernie) Hockman of Athens, Georgia; nieces, Beth, Amy, Meg, Wendy, and Emily; nephews, Philip, Bradley, and Andrew; great nieces, Rachel, Julia, Paulina, Eliza, Evie and Esme; great nephews, Erich, Kurt, Eliot, and Ezra. Greeting Sue in heaven are her parents, her husband, her oldest sister, Connie, her faithful companion Sybill and countless other family and loved ones. There will be a private celebration of life at a later date. Memorial contributions may be made to the Alzheimer’s Association. A huge thank you goes out to Hospice for being there in Sue’s time of need. Revelation 21:4 He will wipe away every tear from their eyes. Death will no longer exist; grief, crying, and pain will exist no longer, because the previous things have passed away

On November 1, 2019, Susan Lucille Hernandez lost her valiant battle with dementia at the age of 76. Sue was born in Napoleon, Ohio on May 12, 1943 to William and Jeannette (Kenning) Wiechers. She graduated from Napoleon High School in 1961... View Obituary & Service Information

The family of Susan Lucille Hernandez created this Life Tributes page to make it easy to share your memories.

Send flowers to the Hernandez family.