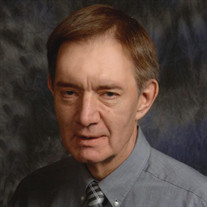 Steven J. Meyer, 67 of Napoleon passed away peacefully on October 21, 2021. Steve was born December 5, 1953 to Julius and Florence (Badenhop) Meyer in Napoleon, Ohio. He was baptized at St. John Lutheran Church in Holgate on December 20, 1953 and was confirmed at St. Paul Lutheran Church in Napoleon on April 7, 1968. Steve graduated from St. Paul Lutheran School, Napoleon High School, the University of Toledo, and Northwest Technical College. On May 21, 2005, Steve married Sandy Ross, and she survives. Steve had a wide variety of interests and talents but first and foremost was his love of music. Steve began his music career playing trombone in the Napoleon High School Marching Band. Steve came by his love of music through his talented family and the “Steve Meyer Polka Band” was formed in November 1976. Steve was a self-taught musician and played the accordion, button box, piano, harmonica, and preformed vocals. The original band included Steve’s father, Julius; his brother, Dan; Uncle Orville Meyer, along with Steve Scheckelhoff, Jack Quin and Rick Stechschulte. With the addition of more brass instruments in 1978 and 1979, the name was changed to “Steve Meyer and the Polka Brass.” Many joyful years were spent playing at local festivals and wedding receptions. Steve worked for Leader Engineering Fabrication in Napoleon for 23 years, a job which he enjoyed and where he made many lasting friends. Steve was a member of St. Paul Lutheran Church in Napoleon where he enjoyed serving as an usher. Besides his wife, Sandy, Steve is survived by his mother, Florence Meyer; brother, Dan (Renee) Meyer; niece, Niki; and nephew, Logan. Family and friends will be received at Rodenberger-Gray Funeral Home, Napoleon on Monday, October 25, 2021, from 2-8 PM. Funeral Services for Steve will be held at St. Paul Lutheran Church, Napoleon on Tuesday, October 26, 2021 at 11 AM with an hour of visitation prior to the service. Memorial contributions in Steve’s name may be made to the St. Paul Lutheran Church Organ Fund, St. Paul Lutheran School Library, CHP Impatient Hospice or a charity of the donor’s choice. Online condolences can be made to the family at rodenbergergray.com. The family wishes to thank all staff members at CHP Defiance Inpatient Hospice for their loving care and concern.

Steven J. Meyer, 67 of Napoleon passed away peacefully on October 21, 2021. Steve was born December 5, 1953 to Julius and Florence (Badenhop) Meyer in Napoleon, Ohio. He was baptized at St. John Lutheran Church in Holgate on December 20, 1953... View Obituary & Service Information

The family of Steven J. Meyer created this Life Tributes page to make it easy to share your memories.

Steven J. Meyer, 67 of Napoleon passed away peacefully on October...

Send flowers to the Meyer family.