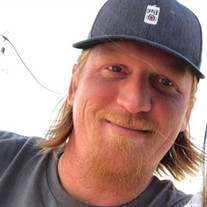 Shane Charles Pullen, 40, Napoleon, died early Saturday morning, July 17, 2021 from injuries sustained in an automobile accident. Shane was born April 14, 1981, in Napoleon, to Scott and Christine Pullen. Shane married the love of his life, Maria (Arreguin) Pullen, on May 21, 2005, and together they raised 6 children. He graduated from Napoleon High School and Four County Machine Trade in 1999. He was employed at Silgan Containers for 21 years as a AAA Mechanic. Shane and Maria’s children, Callie, Aiden, Sophia, Ila, Rosa, and Joseph were the center of his purpose and being. His pride was undeniable. He enjoyed nothing more than cheering them on at sports, and activities. Recently he was able to be the soccer Mom, spending his weekends cheering from the sidelines. Shane was an active parent within St. Augustine School, participating on the board, helping his children with school projects, and chaperoning class trips. He frequently was featured in their TikTok videos, taking great pleasure in his guest appearances showing off his luscious locks. He loved to spend his time on the water in his prized boat. Shane knew no strangers. He gave freely of his time, his love, and his friendship. It was incredibly important to Shane that others were treated with kindness, and compassion. His door was always open, and his grills were always going. He was reliable and dependable; the person to call when you needed help. He is survived by his wife, parents, and children; paternal grandfather, John Pullen, Defiance; mother-in-law, Lydia Arreguin; two sisters, Kellee (Ben) Downard, Weston and Sara (Nick) Weirich, McClure; sisters and brothers-in-law; 11 nieces and nephews, uncles, aunts, cousins, and lifelong friends. He is preceded in death by grandparents, Charles and Mary Lou Motter, and Betty Pullen, Uncle Eddie Pullen and father-in-law, Joseph (Mike) Arreguin. Funeral services will be held at 10:30 AM on Friday, July 23, 2021 at St. Augustine Catholic Church, Napoleon, Ohio. Interment will follow at Grelton Cemetery. Visitation will be held on Thursday from 2-8 p.m. at Rodenberger-Gray Funeral Home, Napoleon, Ohio. The family suggest memorials to the American Cancer Society or St. Augustine Catholic School. Online condolences may be made at www.rodenbergergray.com

The family of Shane Pullen created this Life Tributes page to make it easy to share your memories.

Send flowers to the Pullen family.