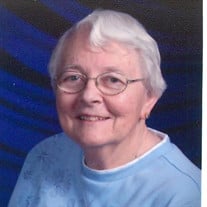 Sally L. Babcock, 86, of Napoleon, Ohio died peacefully on Sunday, July 4th, 2021 at the Napoleon Lutheran Home. She was born July 28, 1934 in Napoleon, Ohio to the late George and Hildegarde (Haase) Rafferty. In 1954, she married Earl Babcock of Napoleon and he preceded her in death in 2013. Sally was a 1st grade teacher at Liberty Center Schools for over 25 years. She was a member of Sharon United Methodist Church, where she was a former Sunday school teacher, and she attended the Napoleon Church of the Nazarene. She is survived by her children, Steven James (Kathy Carlson) of Sylvania, Ohio, John Alan (Candy) Babcock, Thomas Edward (Leigh Ann) Babcock, and Linda Sue (Jeff) Boulton, all of Napoleon; 19 grandchildren; 28 great grandchildren; and a sister, Fleety (Tom) Phillips of Wauseon, Ohio. She was also preceded in death by a son, James Earl Babcock; grandchildren, Jess Alexander Babcock, and Kevin Michael Carlson; sister, Anley Oberdick; and daughter-in-law, Janet Essex Babcock. Funeral services will be held at 11 a.m. on Friday, July 9th, 2021, at Napoleon Church of the Nazarene. Visitation will be held on Thursday from 4-8 p.m. at the church. Interment will follow after the funeral at Hoy Cemetery. In lieu of flowers and gifts, memorial contributions may be made to LifeWise Academy (www.lifewiseacademy.org) or Crisis Pregnancy Center, Napoleon, OH. Online condolences may be made at www.rodenbergergray.com

The family of Sally Babcock created this Life Tributes page to make it easy to share your memories.

Send flowers to the Babcock family.