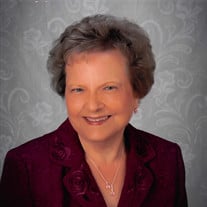 Ruth E. Cordes, 87, of Napoleon, Ohio died Thursday, April 18, 2019 at St. Luke’s Hospital, Maumee, Ohio surrounded by her loving family. Ruth was born April 16, 1932 in rural Deshler, Ohio to the late Albert and Hulda (Scheele) Mohring. She was a 1950 graduate of Deshler High School. On June 8, 1952 she married Harvey Cordes at St. John’s Lutheran Church, Deshler, Ohio. He preceded her in death in September of 1993. Ruth worked in housekeeping at Holiday Inn, Napoleon for over 25 years. She was a talented baker and owned and operated Ruth’s Bake Shop for many years; making wedding and graduation cakes, as well as coffee cake. Ruth was a member of Bethlehem Lutheran Church, Okolona and the local Gleaners. She was named as Henry County Senior Center Woman of the Year, enjoyed wintering in Palmetto, Florida and working in her gardens. She is survived by her children, James (Becky) Cordes of Wauseon, Loren Cordes of Napoleon, Lisa (David) Owen of Napoleon, and Gary (Kim) Cordes of Napoleon; 10 grandchildren and 20 great grandchildren; siblings, Wayne (Marlene) Mohring of Deshler and Marilyn (Dan) Smith of Holgate. She was also preceded in death by a sister, Norma Mohring. Funeral services will be held at noon on Monday, April 22, 2019 at Bethlehem Lutheran Church, Okolona, where visitation will be held from 10-12 p.m. Interment will follow at the church cemetery. Memorial donations are suggested to Bethlehem Lutheran Church or Henry County Senior Center. Online condolences may be made at www.rodenbergergray.com

The family of Ruth Cordes created this Life Tributes page to make it easy to share your memories.