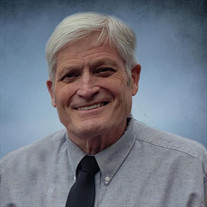 Ronald Carl Kruse, 75, of Holgate, Ohio passed away on Saturday, January 22, 2022, at his home surrounded by his family. He was born on December 23, 1946, in Freedom Township, to William Sr. and Olga (Miller) Kruse. On January 31, 1970, he married Sharon Koester at Emanuel Lutheran Church in Napoleon. Ron was a member of Emanual Lutheran Church and retired from General Motors after more than 50 years with rarely a day missed. He proudly served his country in the US Air Force and was a lifetime member of the American Legion. Ron was fortunate to have gotten to experience a Dayton Honor Flight trip to Washington DC. He was a lifetime Patrick Henry Athletic Booster, enjoyed coaching baseball, and following the Ohio State Buckeyes. Ron also enjoyed attending his granddaughter’s figure skating with BGSC and the Findlay Silver Blades. He would cheer on his grandson’s football and baseball teams at Liberty Benton; and their hockey teams with the Findlay Jr. Trojans and the Northwest Eagles. Ron is survived by his loving wife of over 50 years, Sharon; daughter, Tamara (Rodney) Maas; son, Brian (TyLynn Osborn) Kruse; grandchildren, Savannah Kruse, Brandon Maas, Ryan Maas, and BayLee Osborn; siblings, Margaret Busch, Norma Behrman, Lester Kruse, Shirley (Rob) Walker, and Nancy (Wil) Behnfeldt; and sister-in-law, Elvera Kruse. In addition to his parents, he was preceded in death by brother, William Kruse Jr; sisters, Arleen (Glenn) Bressler and Donna Kruse; brother-in-law, Howard Behrman; and sister-in-law, Diane Kruse. Friends and family will be received at the Rodenberger-Gray Funeral Home, Napoleon on Wednesday, January 26, 2022, from 3:00 PM until 6:00 PM. Funeral services will be private for the family. Interment with military honors will take place at Riverview Memory Gardens, Defiance. Memorial contributions may be made to Dayton Honor Flight or Wounded Warriors. Online condolences and messages may be shared with the family at rodenbergergray.com.

The family of Ronald Kruse created this Life Tributes page to make it easy to share your memories.

Ronald Carl Kruse, 75, of Holgate, Ohio passed away on Saturday,...

Send flowers to the Kruse family.