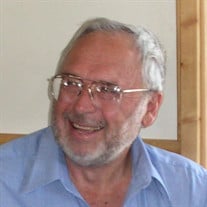 Napoleon- Ronald O. Cordes, 81, of Napoleon Township peacefully passed away Sunday July 7th, 2019 at Orchards of Northcrest in Napoleon surrounded by family. Ronald was born June 18, 1938 in Napoleon Township, OH to the late Otto and Ida (Vorwerk) Cordes. Ron was a farmer and steward of the land who felt honored to farm the Cordes Homestead Farm where he was born. Along with traditional crops, he was innovative and raised several specialty crops including tomatoes (for Campbell Soup and Foster's), pickles, sugar beets and cared for livestock. Ron also served in the US Army Reserve as a Civil Engineer. Ron was actively involved in his home church, St. Paul's Lutheran Napoleon Township, where he served three times as President, as a member on church counsel, and sang in the church choir. He also sang barbershop harmony and was a member of the Defiance Northwesternaires Chorus for over 15 years. He often had a twinkle in his eye, loved to share barbershop humor and one or two “dad” jokes! He also worked for the Lutheran Digest for many years. He is survived by the love of his life, Judith A. (Hockman) Cordes. They were married on April 24, 1960 in his home church, St Paul's Township and were married for over 59 years. He is survived by his sons, Richard O. (Julie), Dr. David A., and Jonathon C. Cordes; grandchildren, Marie (Andy) Burghart, Michelle Cordes, and Melissa (Bob) Young; great grandchildren, Autumn, Matthew, Alex, Lucia, and Spencer; and a sister, Phyllis Hesterman. He was also preceded in death by brothers, Ray Cordes, Robert Cordes; sisters-in-law, Paula Cordes, Lucia (Walter) Delventhal, and brother-in-law, Vernon Hesterman. Funeral Services will be held at 11 a.m. on Thursday, July 11th at St. Paul Lutheran Township church (on Q1). Interment will follow at St Paul's Township Cemetery. Visitation will be held on Wednesday from 2-8 p.m. at Rodenberger-Gray Funeral Home, Napoleon and Thursday from 10-11 a.m. at the church. Memorial contributions may be made to Sara’s Garden, St. Paul’s Stained Glass Fund, or a charity of the donor’s choice. Online condolences may be shared with the family at rodenbergergray.com

The family of Ronald O. Cordes created this Life Tributes page to make it easy to share your memories.