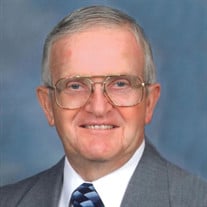 Roger George Wagner, 86, of Napoleon, Ohio died Saturday, November 7, 2020 at Swanton Valley Nursing Home. He was born February 26, 1934 in Wauseon, Ohio to the late Albert and Eulah (Clay) Wagner. On August 28, 1955, he married Emelie (Vandenberghe) Wagner and she preceded him in death on May 9, 1990. He then married Gladys (Romes) Wagner on March 6, 1992 and she preceded him in death on March 16, 2020. George was the livestock foreman for the former Lugbill Livestock for over 45 years. After retirement he worked maintenance for Northwest State Community College and then volunteered at the Napoleon Filling Home of Mercy. He was a member of St. Peter Lutheran Church, Ridgeville Corners. He served in the US Army. George enjoyed sports, but he was especially fond of baseball and the Detroit Tigers. He continued his love for the sport as a coach for little league and pony league teams in Ridgeville and Napoleon. He was a talented singer and liked to sing. He is survived by his children, John Wagner and Jean (Terry) Cohrs; step children, Rick (Diane) Buddelmeyer and Scott Buddelmeyer; grandchildren, Ryan, Drew, Derek, Emelie, and Jillian; step grandchildren, Nicholas and Brittni; step great grandchild, Nicholas, Jr.; and siblings, Richard (Eunice) Winzeler and Mary (Ralph) Mungons. He was also preceded in death by a step grandchild, Matthew. Funeral services will be held on Wednesday, Nov. 11th at 11 a.m. at Rodenberger-Gray Funeral Home, Napoleon. Interment will follow at Forest Hill Cemetery where military honors will be accorded by the Napoleon Joint Veteran Posts. Visitation will be held on Tuesday from 4- 8 p.m. and Wednesday from 10-11 a.m. at the Rodenberger-Gray Funeral Home, Napoleon. In lieu of flowers, memorials are suggested to the Filling Home Foundation. Online condolences may be made at www.rodenbergergray.com.

The family of Roger George Wagner created this Life Tributes page to make it easy to share your memories.

Send flowers to the Wagner family.