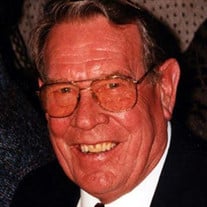 Roger Lee Sonnenberg, 90, of Napoleon, Ohio, passed away on September 16, 2021, at CHP Defiance Inpatient Hospice. He was born in Monroe Township, Ohio, on September 30, 1930, to George and Sophia (Lange) Sonnenberg. Roger married Eloise Glanz on June 6, 1954, at St. Paul Lutheran Church, Napoleon. He proudly served his country in the US Air Force during the Korean War. Roger was an engineer for USDA Soil Conservation Services for 30 years and also worked for the Vernon Nagel Company for 20 years as an estimator. He was an active member of St. Paul Lutheran Church, Napoleon, and a former member of St. Paul Lutheran, Liberty Center. Roger also was a member of the Napoleon American Legion and AMVETS. He is survived by his daughter, Tina (Rev. Richard) Browning; grandsons, Gabriel and Lukas Browning; brother, Gilbert Sonnenberg; and dear friend, Margaret Meyer. In addition to his parents, Roger was preceded in death by his wife, Eloise; brothers, Victor and Hugo Sonnenberg; and sisters, Hulda Hahn and Regina Germann. Friends and family will be received at St. Paul Lutheran Church, Napoleon, on Saturday, October 9, 2021, from 10:00 AM until the time of services at 11:00 AM. Interment with military honors will follow at Glenwood Cemetery. Memorial contributions may be made to St. Paul Lutheran Church, Napoleon. Online condolences and messages may be shared with the family at rodenbergergray.com.

The family of Roger Lee Sonnenberg created this Life Tributes page to make it easy to share your memories.

Roger Lee Sonnenberg, 90, of Napoleon, Ohio, passed away on September...