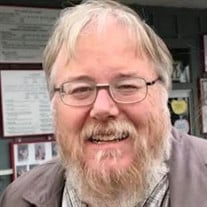 Roger D. Richard, 54, of Westhope, Ohio died unexpectedly on September 12, 2021 at his residence. He was born February 14th, 1967 in Bowling Green, Ohio to the late Paul “Pinky” and Marilyn (Shively) Richard. He was also preceded in death by a brother, Craig Richard. He is survived by a sister, Donna (Michael) Zalar of Olmsted Twp., Ohio; nieces and nephews, Alexander (Kendra) Zalar, Noelle (Candido) Silverio, Paul Zalar, Elana Zalar, and Ted Zalar. Roger was a graduate of Patrick Henry High school and Bowling Green State University. He worked at the Wood County Auditors office as a Real Estate Transfer Specialist for 28 years. He was a lifelong member of the Westhope Bible Church, serving as treasurer. He was a member of Gideons International in Henry County, served as President and board member of Henry County Health Board, Board member of the Henry County Planning Commission, Precinct member for the Henry County Republican Central Committee, poll worker for the Henry County Board of Elections, Treasurer of the Sons of American Legion in McClure and was about to celebrate 35 years as a 4-H Advisor Richfield Township. Roger was a Mayberry fanatic. He loved the Andy Griffith Show as a kid and attended the annual Mayberry Days in Mt Airy, NC every year. To his excitement he made his acting debut in a cameo performance in the just released, “Mayberry Man” movie and had recently returned from a premier viewing with fellow cast members. Roger was an avid collector of memorabilia, especially vintage TV shows. Another favorite collectible was anything related to Union 76 gas items, prompted by the family fuel business, Richard Oil in McClure Ohio. He also enjoyed train watching and restoring antique tractors. Along with his involvement with the 4-H club and Henry Co Fair, a highlight was showing one or more of his antique tractors at the fair. He might also include working at the milkshake stand as a favorite moment where he was able to work and visit with everyone. Roger never met a stranger and truly enjoyed nurturing friendships and being involved in many organizations throughout Henry and Wood County. He was a passionate fan of BGSU Hockey and would follow the Falcon Hockey team throughout their season. However, his deepest passion was in his family, especially his nieces and nephews. He was intensely proud of each one and was committed to visiting them no matter where they lived. Roger would gladly make long detours to connect whenever he was in their area. That might mean 200 miles away, but Uncle Roger would show up. No one did “Uncle” better than Rog’. He was a loving and loyal man, with a deep abiding faith. His service to Westhope Bible Church was unshakable. Roger was deeply committed to his family and will be deeply missed. A memorial gathering will be held from 3:00 – 8:00 PM on Friday, October 1, 2021 at Rodenberger-Gray Funeral Home, Napoleon, OH. A memorial service will be held at 11:00 AM on Saturday, October 2, 2021 at the funeral home. A private family interment was held at Richfield Twp. Cemetery. Memorial contributions are suggested to Gideon International. Online condolences may be made at rodenbergergray.com. Masks are encouraged for visitation and services.

The family of Roger Richard created this Life Tributes page to make it easy to share your memories.

Send flowers to the Richard family.