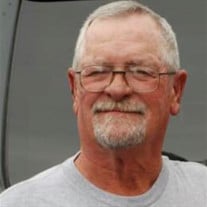 Robin Lynn Meter, 70, of Malinta, Ohio passed away surrounded by his family on January 20, 2020. He was born in Toledo, Ohio on March 6, 1949 to Richard “RJ” and June (Swick) Meter. Robin was a member of the Napoleon Moose Lodge and enjoyed working outside. He was a caretaker for the Henry County Fairgrounds. Robin especially enjoyed spending time with his grandchildren. He is survived by his children, Gary (Michelle) Meter and Alicia (Mark Neumeier) Meter; grandchildren, Hanah (Tyler Varner) Meter, Chayce Neumeier, Jackson Meter, Shawn Neumeier, Benton Meter, Shilynn Neumeier and Allen Neumeier; extended grandchildren, Connor and Zachary Husted and siblings, Jerry Meter, Donald (Jeanie) Meter and Joann (Dean) Hitts. In addition to his parents, Robin was preceded in death by his wife, Claudia (Clay) Meter. Friends and family will be received at the Rodenberger-Gray Funeral Home, Napoleon on Friday, January 24, 2020 from 3:00 pm until 7:00 pm. A memorial service will be held at the funeral home on Saturday, January 25, 2020 at 11:00 am. Interment will be held at Riverview Memory Gardens at a later date. Memorial contributions may be made to the family in care of Hanah Meter. Online condolences may be shared with the family at rodenbergergray.com.

The family of Robin Lynn Meter created this Life Tributes page to make it easy to share your memories.

Send flowers to the Meter family.