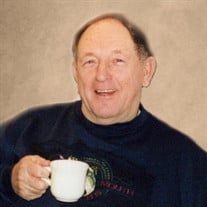 Robert “Bob” E. Plotts, 83, of Napoleon, Ohio, formerly of Grelton, Ohio passed away on September 16th, 2021 at the Henry County Hospital. He was born July 14th, 1938 in Napoleon, Ohio to the late Lloyd and Annabelle (Gilliland) Plotts. Bob was a 1956 graduate of Malinta-Grelton High School. He served in the United States Army and was discharged in 1968. He worked and retired from Tenneco of Napoleon after 39 years. He enjoyed snowmobiling, bowling, fishing, dove and duck hunting. He was a 50-year member of the McClure American Legion. He took great pride in watching his nephews, great nephew and great nieces participate in athletics. He was an avid gardener and grew the best sweet corn and melon around. He was preceded in death by the special lady in his life, Mary Gray. He is survived by his sister, Eulene (Steve) Johnston; nephews, Kevin (Krista) Nye, Matt (Kelly) Nye, Joel (Christa) Johnston, Jamie (Christa) Johnston; great nieces and nephews, Taylor (Brett) Ziegler, Zach Nye (Carly Rhoads), Abby Nye, Hannah Johnston, Elizabeth Johnston, Simeon Johnston, Seth Johnston, and Elianna Johnston; and great-great nieces, Lacey Miller and Octavia Nye. Funeral services will be held at 11 a.m. on Saturday, September 25th at Rodenberger-Gray Funeral Home, Napoleon. Masks are not required and casual attire is preferred. Interment will follow at Grelton Cemetery, where military honors will be accorded by the U.S. Army Military Honor Guard and the McClure American Legion. Visitation will be held on Friday from 4-7 p.m. and Saturday from 10-11 a.m. at the funeral home. In lieu of flowers, memorials are suggested to the American Heart Association.

The family of Robert E. Plotts created this Life Tributes page to make it easy to share your memories.

Send flowers to the Plotts family.