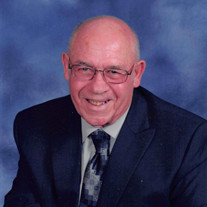 Robert Lee Dennie, 87, of Napoleon, Ohio passed away on Thursday, June 20, 2019. He was born in Napoleon on November 9, 1931, to Loyd “Red” and Ruby (Ritter) Dennie. Bob married Esther Mohring on March 23, 1952, at St Paul Lutheran Church. Bob served his country in the US Army and was a member of the American Legion Post #300. He was also a member of Emanuel Lutheran Church and enjoyed volunteering his time with Soul Food, serving the community and mentoring boys through Cub Scouts and Webelos. Bob liked to work outside and tend his garden, he also enjoyed fishing and woodworking in his spare time. He is survived by his wife of 67 years, Esther; children, Phillip (Karen), Deborah Weirauch, Thomas (Sandra), Steven (Debra) and Jeffrey (Diana); 13 grandchildren and 26 great-grandchildren. In addition to his parents, Bob was preceded in death by his brothers, Larry and James; and son-in-law, Mark Weirauch. Friends will be received at the Rodenberger-Gray Funeral Home on Sunday, June 23, 2019, from 2PM until 4PM and 6PM until 8PM. Visitation will continue at Emanuel Lutheran Church on Monday, June 24, 2019, from 10AM until the time of services at 11 AM. Interment will follow at Riverview Memory Gardens with military honors. Memorial contributions may be made to the church or Hospice of Henry County. Online messages and condolences may be shared with the family at rodenbergergray.com

The family of Robert Lee Dennie created this Life Tributes page to make it easy to share your memories.

Robert Lee Dennie, 87, of Napoleon, Ohio passed away on Thursday,...

Send flowers to the Dennie family.