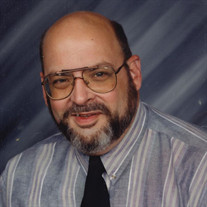 Rick L. Ford, 68, of Napoleon, Ohio passed away on Monday, August 2, 2021. He was born in Toledo, Ohio on July 18, 1953, to Robert Sr. and June (Schively) Ford. Rick was employed at the Campbell Soup Company for over 42 years. He was a member of Emanuel Lutheran Church and the Liberty Center Masonic Lodge. Rick enjoyed helping people which led to him volunteering for the Henry County Hospital, playing Santa for 15 years and also as a Hospice volunteer. He was extremely proud of his grandchildren and enjoyed going to their games and school activities. Rick is survived by his sons, Travis (Jackie) and Shawn (Tara); grandchildren, Kristin, Katelyn, Aadon, Blaine, and Cohen; and brother, Robert Jr. (Starr). In addition to his parents, he was preceded in death by his sisters, Darlene and Nancy, and stepmother, Mary. A memorial gathering will be held on Wednesday, August 4, 2021, at the Rodenberger-Gray Funeral Home, Napoleon from 5:00 PM until 7:00 PM. A memorial service will be held at 7:00 PM. Memorial contributions may be made to Hospice of Northwest Ohio or the Alzheimer’s Association. Online condolences and messages may be shared with the family at rodenbergergray.com. The family would like to extend a special thank you to the staff and Northcrest Nursing Home and Hospice of Northwest Ohio for all of their care and support.

The family of Rick L. Ford created this Life Tributes page to make it easy to share your memories.

Send flowers to the Ford family.