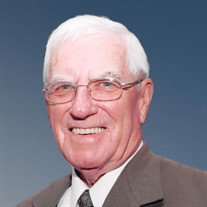 Richard “Pete” Travis, 84, of Coldwater, Michigan and formerly of Napoleon, Ohio passed away on Wednesday, November 11, 2020. He was born in Napoleon on November 20, 1935 to Raymond and Norma (Stevens) Travis. Pete married Nancy Druhot on February 20, 1988 at St. Paul Lutheran Church, Napoleon. Pete worked as a Lab Tech for Tenneco Inc. in Napoleon where he retired after 44 years. He was a member of the Army National Guard, the American Legion and VFW. Pete also served his community on the Napoleon Volunteer Fire Department and as the Assistant Chief. He was a huge fan of Ohio sports, cheering on the Buckeyes, the Browns, and the Indians. After he retired, Pete and Nancy spent their time at Long Lake in Coldwater. Pete is survived by his loving wife, Nancy, children, Brice (Stacey) Travis and Kimberly (Steven) Camp; daughter-in-law, Wendy Travis; stepchildren, James (Tracey) Hoff, Jeff (Brenda) Hoff, Michael (Laura) Hoff, Suzie (Charles) Irving and Lisa (Scott) Boltz; grandchildren, Justin (Christina) Travis, Kayla (Cory) Cochran, Morgan Travis, Brad Camp, Josh Camp, Brett Camp and Dylan Camp; 11 step grandchildren; four great grandchildren with one more on the way; 12 step great grandchildren and brother-in-law, Dale Gerken. In addition to his parents, he was preceded in death by his son, Randall and sister, Beverly Gerken. Friends and family will be received at the Rodenberger-Gray Funeral Home, Napoleon, on Tuesday, November 24, 2020 from 2:00 PM until 8:00 PM. Funeral Services will be held at the funeral home on Wednesday, November 25, 2020 at 11 AM. Interment to follow at Forest Hill Cemetery. Memorial contributions may be made to the American Cancer Society, American Stroke Association, or the Napoleon Civic Center. Online condolences and messages may be shared with the family at rodenbergergray.com.

The family of Richard "Pete" Travis created this Life Tributes page to make it easy to share your memories.

Send flowers to the Travis family.