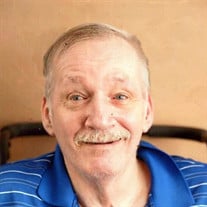 Richard “Dick” Spangler, 74, of Napoleon, Ohio passed away on December 6, 2019. He was born in Liberty Center, Ohio on June 10, 1945 to Richard and Ruth (Ballard) Spangler. He married Wilma “Jean” Greenhagen on March 24, 1979 at St. Paul Lutheran Church, Napoleon. Dick proudly served his country in the US Army during the Vietnam War and was a member of the American Legion Post #300. He worked at Tenneco Automotive, a member of St. Paul Lutheran Church, Napoleon and served on the School Board for St. Paul Elementary School. Dick enjoyed traveling and taking aerial tours wherever they went. He liked to take his motorcycle out, ride the dune buggy he built, power through the drifts on his snowmobile or take a leisurely boat ride. Dick is survived by his loving wife of 40 years, Jean; daughter, Nicole (Stephen) Barnhart; grandson, Tristan; brothers, Marvin (Alice) Spangler and Bernard (Jane) Spangler; sister, Carol Cimas and many nieces and nephews. He was preceded in death by his parents. Friends and family will be received at the Rodenberger-Gray Funeral Home, Napoleon on Tuesday, December 10, 2019 from 2:00 pm until 7:00 pm. Funeral Services will be held at St. Paul Lutheran Church, Napoleon on Wednesday, December 11, 2019 at 11:00 am with an hour of visitation prior to services. Interment will follow with military honors at Forest Hill Cemetery. Memorial contributions may be made to the Parkinson’s Association, Gideon’s International or St. Paul Lutheran Church. Online condolences and messages may be shared with the family at rodenbergergray.com.

The family of Richard "Dick" Spangler created this Life Tributes page to make it easy to share your memories.

Richard “Dick” Spangler, 74, of Napoleon, Ohio passed away on...

Send flowers to the Spangler family.