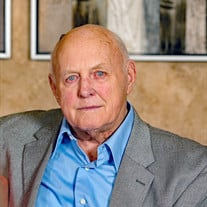 Richard Edward Brandt, 87, of Archbold, Ohio passed away on Thursday, June 20, 2019. He was born on February 8, 1932 to Albert and Wilhelmina (Arnos) Brandt in Ridgeville Corners, Ohio. He married Jeanette Tilse on December 27, 1959 at St. John Lutheran Church and they were happily married for 59 years. Richard and his brother, Carl, were dedicated farmers. They founded and operated Brandt Brothers Inc. of Ridgeville Corners, Ohio in 1962. Prior to his enjoyment of doing electrical work, he was a dairy farmer and Surge Dairy Equipment Dealer. Richard and his wife, Jeanette, spent many years traveling around the countryside. He loved the Canadian Rockies and visited them 20 times throughout his life. They also traveled to 49 of the 50 states and several countries. He was a man full of stories that always made you laugh and smile. Richard is survived by his wife, Jeanette; children, Lori (Ed) Wachtman of Napoleon; Linda (Brent) Petersen of Napoleon; and Larry (Sandra) Brandt of Ridgeville Corners; grandchildren, Logan Petersen, Megan Petersen, Joseph (Ashley) Hart, and Christina Englehart; great grandchildren, Eli, Blake, and Leyna. In addition to his parents he was preceded in death by his brother, Carl (Norma Jean) Brandt, and sister, Mildred (Carl) Fry. Friends and family will be received at the Rodenberger-Gray Funeral Home, Napoleon, on Monday, June 24, 2019 from 2PM until 8PM. Visitation will continue on Tuesday, June 25, 2019 from 10AM until the time of services at 11AM at St. John Lutheran Church (corner of SR 6 and SR 66). Interment will follow at the church cemetery. Memorial contributions may be directed to Worship for Shut-ins or St. John Lutheran Church. Online messages and condolences may be shared with the family at rodenbergergray.com.

Richard Edward Brandt, 87, of Archbold, Ohio passed away on Thursday, June 20, 2019. He was born on February 8, 1932 to Albert and Wilhelmina (Arnos) Brandt in Ridgeville Corners, Ohio. He married Jeanette Tilse on December 27, 1959 at St. John... View Obituary & Service Information

The family of Richard Edward Brandt created this Life Tributes page to make it easy to share your memories.

Richard Edward Brandt, 87, of Archbold, Ohio passed away on Thursday,...

Send flowers to the Brandt family.