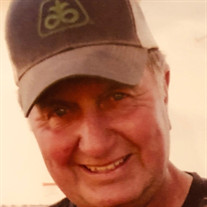 Rex Allen Mason, 71, of Waterville, OH, passed away on January 5,2019, at Hospice of Northwest Ohio in Toledo, OH, due to complications of diabetes. He was born on July 12,1947, in Wauseon, OH, and raised on the family farm in McClure, OH. Rex graduated from Damascus Local High School (McClure) in 1966 and served in the U.S. Army from 1967 to 1969, stationed in Seoul, Korea. He is one of two children born to the late Eugene and Ruth (Rohrbaugh) Mason and was the beloved husband of Carol (Johnson) Mason for over 44 years. Rex will forever be remembered by his children, Janell (Jeffery) Miller of Grand Rapids, OH, and Jeffrey (Emily) Mason, of McClure, OH; and treasured by his grandchildren, Maya, Layne, and Nora Mason, and Blake and Aubree Miller. He is also survived by his sisters-in-law, Sandra (Bernard, d.) Mason of McClure, OH, Ruth (Charles) Labie of Napoleon, OH, Nancy (Charles) Haton, Palm Bay, FL, and brother-in-law, Philip (Linda) Johnson, Napoleon, OH. He was blessed with beautiful nieces and nephews along with countless other friends and family whom were dear to him. After serving in the military, Rex returned home and worked with the Arthur S Langenderfer Paving (later known as Northern Ohio Asphalt & Paving), but his love was always to farm. Due to the untimely death of his father, Rex and his brother, Jake, farmed together as Mason Brothers. Upon his brother's retirement, Rex achieved his ultimate goal of working side by side with his son, Jeff, as Mason Family Farms, with daughter, Janell, also lending a hand when possible. They produced corn, soybeans, and wheat. He also was an assistant with Mason Seed Sales. Rex valued the lost practice of cultivating the crops "to make stuff cleaner" and to "turn up the black dirt" His other fond memory was cutting wheat with his first new L3 Gleaner combine years ago. Rex and Carol were high school sweethearts, a relationship that started once Rex finally asked Carol for the "last skate" at a roller-skating party at the Napoleon Skating Rink as teenagers. In high school, Rex loved the game of basketball, and continued through life enjoying bowling, playing cards, and throwing for dartball games at Zion. As a couple, Rex and Carol enjoyed Friday night dinner dates, road trips and cruises with special friends, attending grandchildren events, NASCAR and sprint car races, and tractor pulls. One of his favorite passions was teaching his grandchildren the unique art of farming that also included great conversations that included fun songs and stories shared in the cab of the tractor in the field or the semi-truck when traveling to the grain elevator. Rex will be remembered for his sense of humor and quick wit, never foiling to make others laugh, and his skill at Texas Horseshoes at the annual family camping weekends. Rex was baptized at Trinity Lutheran Church in Malinta, OH; was a former member of St. Paul's Ev. Lutheran Church in McClure, OH, where they were married and had their children baptized; and currently a member of Zion Ev. Lutheran Church in Waterville, OH. He was also a member of the Farm Bureau Land Lovers Council, American Legion Post 332 in McClure, OH, and was a life member of the Anthony Wayne FFA Alumni. Rex was predeceased by his parents; brother, Bernard; parents-in-law, Ivan and Catharine (Shaffer) Johnson; and brother- and sister-in-law, Derry and Janice (Johnson) Middleton. Funeral service will be held at 12 p.m. on Wednesday, Jan. 9, 2019 at Zion Ev. Lutheran Church, Waterville, Ohio. Interment will follow at Hockman Cemetery, McClure, Ohio, where military honors will be accorded by the McClure American Legion. Visitation will be held on Tuesday from 2-8 p.m. at Rodenberger Funeral Home, 1010 Westmoreland Ave. Napoleon, Ohio and Wednesday from 10 a.m. – 12 p.m. at the church. In lieu of flowers, please consider memorials to the American Legion Post 332,230 S East St, McClure, OH 43534; Zion Ev. Lutheran Church, 22 N Second St, Waterville, OH 43566; or to Hospice of NW Ohio, 800 S. Detroit Ave, Toledo, OH 43609.

Rex Allen Mason, 71, of Waterville, OH, passed away on January 5,2019, at Hospice of Northwest Ohio in Toledo, OH, due to complications of diabetes. He was born on July 12,1947, in Wauseon, OH, and raised on the family farm in McClure, OH. Rex... View Obituary & Service Information

The family of Rex Allen Mason created this Life Tributes page to make it easy to share your memories.

Rex Allen Mason, 71, of Waterville, OH, passed away on January...

Send flowers to the Mason family.