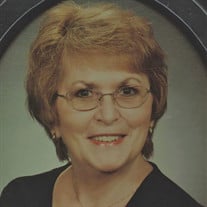 Priscilla Garbers, 76, of Napoleon, Ohio passed away peacefully on Tuesday, February 9th, 2021 at CHP Defiance Area Inpatient Hospice. She was born March 29, 1944 in Napoleon, Ohio to the late Clarence and Genevieve (Hagler) Dieringer. On October 21, 1961, she married William “Bill” Garbers in Napoleon and he preceded her in death on October 31, 2005. Priscilla attained her accounting degree from Northwest State Community College and worked as a general accountant. After retirement, she worked part-time at the Napoleon Public Library and enjoyed reading to the younger kids. She was a member of St. Paul Lutheran Church, Napoleon. She enjoyed working in the garden, knitting, and had a great love of animals. She had a tremendous appreciation for music which she shared with her daughters. She loved her family dearly and enjoyed every minute she could spend with them. She is survived by her daughters, Kimberly (Steven) Dietrich of Napoleon, Tricia Minnich of Napoleon, and Billie Garbers of Columbus; grandchildren, Brandee Groll (Joe Murcko), Kelsey (Ryan) Hall, Makenzie (Jordan) Keller, Zachary and Conner Minnich; and 8 great grandchildren. She was also preceded in death by a brother, Carl Dieringer. A memorial service will be held on Friday, February 12 at 2 p.m. at St. Paul Lutheran Church, Napoleon. A private interment will be held at Glenwood Cemetery this spring. Friends will be received at the church on Friday from 1-2 p.m. Masks and social distancing are required. The service will be livestreamed via the church’s website at 2p.m. www.stpaulnapoleon.org. Memorial contributions are suggested to St. Paul School Library or Henry County Humane Society. Arrangements are in care of Rodenberger-Gray Funeral Home, Napoleon and online condolences may be made at www.rodenbergergray.com

The family of Priscilla Garbers created this Life Tributes page to make it easy to share your memories.

Send flowers to the Garbers family.