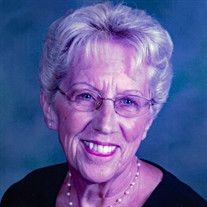 Phyllis Jean Sunderman, 87, of Hamler, Ohio passed away Thursday, Sept. 3, 2020 at Northcrest Rehab and Nursing Center, Napoleon Ohio. She was born March 30, 1933 in Findlay, Ohio to James and Eva Edmiston. She was a 1951 graduate of Findlay High School. On April 5, 1953 she married her high school sweetheart, Carl Brooks, in Findlay, Ohio. Together they had sons, Ken, Steve, and Scott. She loved following and watching her boys play their many sports. Family was important and holidays were always a special time. She was especially excited to spend time with her grandchildren through the years. Carl preceded her in death on Oct. 10, 2001. She later married Marvin Sunderman on July 15, 2006 in McClure, Ohio. Together, they enjoyed traveling and locally serving and dancing at the Bavarian House. She enjoyed her dog Barney, planting flowers in her yard, buying gifts for others, and visiting with family and friends. She was an avid Ohio State Buckeye fan. Phyllis worked at the Ohio Bank in Findlay and the National City Bank (PNC) in Napoleon until she retired. Phyllis was a life member of the McClure American Legion Auxiliary and loyal member of the McClure United Methodist Church. She recently attended St. John Lutheran Church, Deshler. Phyllis is loved and survived by her husband, Marvin; her sons: Kenneth (Susan) Brooks of Pandora, Ohio, Steve (Terri) Brooks of Plainfield, Illinois, and Scott Brooks of Van Buren, Indiana; her 8 grandchildren and 10 great grandchildren; and sister-in-law, Becky Edmiston; Marvin's children: Eugene (Meg) Sunderman of Upper Sandusky, Ohio, Lynette (Ronald "Duke") Lawrence of Hamler, Ohio and Diane (Steve) Zimmer of Logansport, Indiana; 3 step­ grandchildren and 4 step-great grandchildren. She was preceded in death by parents Jim and Eva Edmiston; brother, James Edmiston and husband Carl Brooks. A private memorial service will take place at the McClure United Methodist Church. Interment will follow at Hockman Cementary, McClure. Memorials may be made to McClure United Methodist Church, 430 S. East Street, McClure, Ohio, 43534. Online condolences may be made at www.rodenbergergray.com "May our Lord Jesus Christ himself and God our Father, who loved us and by his grace gave us eternal encouragement and good hope, encourage your hearts and strengthen you in every good deed and word." II Thessalonians 2:16-17

Phyllis Jean Sunderman, 87, of Hamler, Ohio passed away Thursday, Sept. 3, 2020 at Northcrest Rehab and Nursing Center, Napoleon Ohio. She was born March 30, 1933 in Findlay, Ohio to James and Eva Edmiston. She was a 1951 graduate of Findlay... View Obituary & Service Information

The family of Phyllis Jean Sunderman created this Life Tributes page to make it easy to share your memories.

Send flowers to the Sunderman family.