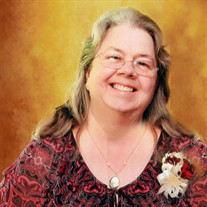 Phyllis Jane (Swart) Newell, age 82, of Napoleon died Thursday November 25, 2021, at Story Point Waterville where she passed peacefully from Alzheimer’s disease. She was born March 22, 1939, in Swanton, Ohio, the daughter of Jay Martin Swart and Leona Blanch (Croninger) Swart. Phyllis was married to Philip A. Newell, celebrating 60 years of marriage this November, and lived in Napoleon for nearly their whole marriage. Phyllis enjoyed many artistic hobbies including cross-stitch, crochet, knitting, painting rocks, and woodburning especially wooden eggs. She enjoyed doing family genealogy, watching the grandkids in their activities, and caring for her plants and flower garden. In addition to her parents, she was predeceased by her brothers, George Franklin Swart and Harold Jay Swart, while survived by her sister, Joyce (Swart) Jackson of Delta. Also surviving along with her husband, Philip Newell, are a son, Perry (Patricia) Newell of Dayton; daughters, Virginia (Howard) Hammon of Toledo and Pamela (David) Kahle of Defiance; seven grandchildren, Ashley, Alyssa (José), Howard IV (Marissa), Meredith (Tyler), Kari (Dustin), Kurt (Abbey), and Klay (Becca); and six great-grandchildren Leon, Garin, Serenity, Adaline, Liliana, and Brycen. Friends and family will be received at the Rodenberger-Gray Funeral Home, Napoleon, on Saturday, December 4, 2021, from 10:00 AM until the time of services at 12:00 PM. Interment will follow at Glenwood Cemetery. Memorial contributions may be made to the Alzheimer’s Association, Elara Caring Hospice, or the Henry County Senior Center. Online condolences and messages may be shared with the family at rodenbergergray.com.

The family of Phyllis Jane Newell created this Life Tributes page to make it easy to share your memories.

Send flowers to the Newell family.