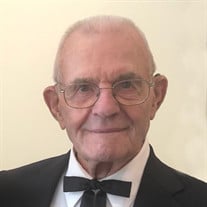 Orlan Richard Wichman, age 87, passed away surrounded by his family on Christmas Eve, 2019, at Fulton Manor. The son of Harold and Esther (Koch) Wichman, he was born on November 10, 1932 in Flatrock Township, Henry County, Ohio. He was baptized and later confirmed his faith at St. Peter’s Lutheran Church, in Florida, Ohio. A graduate of Florida High School in 1950, Orlan received a degree in accounting from International Business College in Ft. Wayne, Indiana in 1952. Orlan joined the Army a year later, but before being deployed to Japan and Korea he married his college sweetheart Constance (Connie) Gaede on November 15, 1953. He and Connie settled on the family farm in Richfield Township where they raised four children. Orlan farmed for a number of years before becoming a partner with his father-in-law in the produce business. Orlan was an active member of Peace Lutheran Church, Deshler, Ohio. A charter member of the Bavarian Club in Deshler, he was also a member of the Lutheran Historical Society as well as Low German Club. He also volunteered as an EMT for the Henry County EMS and as a deputy for the Henry County Sheriff’s Office. An avid pilot and Quiet Birdman, Orlan loved flying his T-34 warbird and other aircraft. He was an active member of the T-34 Association, as well as a lifetime member of the Commemorative Air Force, the Aircraft Owners and Pilots Association (AOPA) and the Experimental Aircraft Association (EAA). He regularly was part of the airshow at EAA AirVenture held each July in Oshkosh, Wisconsin. He and several fellow T-34 pilots, known as the Hooligans Flight Team, often could be seen flying high over regional airshows, races and other special events. Orlan is survived by his wife of 66 years, Connie, and four children; Kevin (Dalida) Wichman, Xenia, Ohio; Kelli (Keith) Kuntz, Wauseon, Ohio; Kristi (Paul) Moses, West Lafayette, Indiana; and Keith (Jewell) Wichman, Spring Lake, Michigan, 17 grandchildren and 4 great grandchildren. He is also survived by his two sisters Marlene (Wayne) Hahn, Leander, Texas; and Jan Galbraith, Austin, Texas. Preceding him in death were his parents Harold and Esther (Koch) Wichman, and in-laws Franklyn and Geraldine (Hall) Gaede. Visitation will be at Rodenberger-Gray Funeral Home in Napoleon, Ohio on Friday, December 27, 2019, from 2:00-8:00 p.m. The funeral service will be held at 11:00 a.m. on Saturday, December 28, 2019 at Peace Lutheran Church, Deshler, Ohio with an hour of visitation prior to services. Burial will take place at 2:00 p.m. at Forrest Hill Cemetery in Napoleon, Ohio In lieu of flowers, the family requests memorials be made to Peace Lutheran Church and Elara Caring (Hospice) of Toledo, Ohio. Online condolences and messages may be shared with the family at rodenbergergray.com.

Orlan Richard Wichman, age 87, passed away surrounded by his family on Christmas Eve, 2019, at Fulton Manor. The son of Harold and Esther (Koch) Wichman, he was born on November 10, 1932 in Flatrock Township, Henry County, Ohio. He was baptized... View Obituary & Service Information

The family of Orlan Wichman created this Life Tributes page to make it easy to share your memories.

Orlan Richard Wichman, age 87, passed away surrounded by his...

Send flowers to the Wichman family.