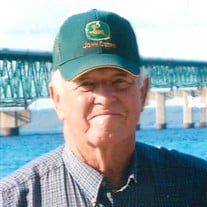 Norman Richard Nickels, 82, of McClure, OH, passed away peacefully on January 8, 2021, at home surrounded by his loving family. He was born on September 24, 1938, in rural Hamler, Ohio, to the late Richard and Meta Nickels (Basselman). On November 14, 1959, he married Ruth Ann Badenhop and she preceded in death on November 23, 2014. Norman served in the U.S. Army from 1957 to 1963. He spent his lifetime farming in the summer and repairing the lake freighters at the Toledo Lake Erie Shipyard. In earlier years, Norm and Ruth enjoyed visiting all the local polka festivals and spending vacations in Sault Ste. Marie, Michigan, watching the freighters go through the Soo Locks. He enjoyed fishing, boating, and camping alongside the Maumee River with his family for many years. One of the fondest memories of his grandchildren is sitting on Grandpa Norm’s lap and looking at farm magazines and the Auto Trader. He had a knack for magically finding “bugs” in the kids’ hair and ears. Norman was a loving husband, father, grandfather, and great grandfather. He was a member of the Peace Evangelical Lutheran Church, Deshler, Ohio. He is survived by sons, Douglas (Sandra) Nickels of Ravenel, South Carolina, and Dean (Amy) Nickels of Malinta, Ohio, daughter Sandra (Chuck) Kuhlman of McClure, Ohio, 10 grandchildren, 8 great grandchildren, 2 step great grandchildren and brothers, Melvin (Lavina) Nickels, Deshler, Ohio, and Eldon Nickels, McClure, Ohio. He was also preceded in death by a son, Jerry Lee Nickels and granddaughter, Jocelyn Suzanne Nickels. Funeral services will be held at 1 p.m. on Tuesday, Jan. 12th at Peace Lutheran Church, Deshler. A private interment with military honors will be held at a later date. Visitation will be held on Monday, Jan 11th from 4-8 p.m. at Rodenberger-Gray Funeral Home, Napoleon and Tuesday from 12 – 1 p.m. at the church. In lieu of flowers, memorials are suggested to Peace Lutheran Church. Online condolences can be made at www.rodenbergergray.com Due to the Covid-19 pandemic Masks and Social distancing will be required at all times.

Norman Richard Nickels, 82, of McClure, OH, passed away peacefully on January 8, 2021, at home surrounded by his loving family. He was born on September 24, 1938, in rural Hamler, Ohio, to the late Richard and Meta Nickels (Basselman). On... View Obituary & Service Information

The family of Norman R. Nickels created this Life Tributes page to make it easy to share your memories.

Send flowers to the Nickels family.