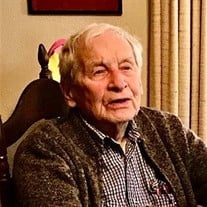 Norman Imbrock, third child born to Henry and Helen Imbrock (Cordes), born on the farm Sept. 18, 1930, baptized Oct. 3. 1930 at St. Paul’s Napoleon TWP, died peacefully at the Lutheran Home in Napoleon at 2:16 am November 29, 2019. Norm graduated from Napoleon High school in 1948. He attended Capital University, Columbus OH where he completed his Bachelor’s degree and went on to study at the Trinity Lutheran Seminary, Columbus OH. Norman met Bernice Purdon while studying at Capital University. They were married August 8, 1954. The marriage was solemnized at St. John’s Lutheran Church, New Baltimore, MI with Pastors George Daschner and George Hueter presiding. The newly married couple moved to St. Mark’s Lutheran church in Butler, PA, for a year of internship before returning to their final year of training for the ministry. Norm graduated from the seminary and received his call from The Board of Foreign Missions on May 10 and was ordained Sept 30, 1956. Prior to travelling overseas, to Papua New Guinea, they both studied linguistics for 8 weeks in Grand Forks, ND with Summer Institute of Linguistics in association with Wycliffe Bible Translators. Norm and Bernie travelled to Papua New Guinea in 1956 and served there as a missionary team with the ELC - PNG until 1987 when they returned to the U.S. While on Sabbatical in 1980 Norm completed a Master’s Thesis on the Significance of the two Kingdom’s doctrine for third world churches. Together they served Our Savior’s Lutheran Church in Patchogue, Long Island, NY. From 1987 to 1997 together they served at Our Savior’s Lutheran Church in Patchogue, Long Island, NY. Norm retired from full-time ministry and moved back to CrissCross Farm Napoleon, OH in Sept 2000. The couple was blessed with the birth of two sons and two daughters; Mathew and Valerie (Fry) Imbrock of Cowiche, WA, Timothy and Carol (Finley) Imbrock of Nampa, ID, Naomi and David Radke of Brisbane, Queensland – Australia, and Joanna and Chris Peters of Woodbury, MN. Norm is survived by his sister-in-law, Patricia (Purdon) and Jim Hamby of Indianapolis IN, his 4 children, 10 grandchildren and 9 great-grandchildren. Preceding Norm in death was his older sister, Lucille Dishop, older brother, Eldon Imbrock, both of Napoleon, OH and one grandchild Trevor Imbrock of Ely MN. Visitation will be from 1:00 pm until 7:00 pm at Rodenberger-Gray Funeral Home, 1010 Westmoreland Avenue, Napoleon, OH on December 17, 2019. The funeral service will be held at Bethlehem Lutheran Church, 02499 Adam’s Ridge Rd. Defiance, OH, at 11:00 am on December 18, 2019 with one hour of visitation prior to services. Burial will follow at the cemetery of St. Paul’s Lutheran Church, Napoleon TWP. Memorials may be given in Memory of Norman Imbrock to; MAF (Mission Aviation Fellowship P.O. Box 47 Nampa, ID 83653) or to Bethlehem Lutheran Church (02499 Adam’s Ridge Rd. Defiance, OH). If you chose to send a card, please send it in care of the funeral home. Norms ordination bible verse sums up his Life! “Do not be ashamed therefore of testifying to our Lord… who saved us and called us with a holy calling… not by virtue of our works… but by grace given us through Jesus Christ who abolished death and brought life and immortality to light through the Gospel.” (2 Timothy 1:8-10) Online condolences can be made at www.rodenbergergray.com.

The family of Rev. Norman Henry Imbrock created this Life Tributes page to make it easy to share your memories.

Send flowers to the Imbrock family.