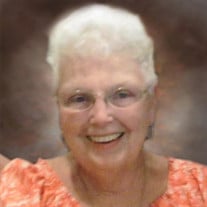 Norma Mae Eldridge, 92, of Napoleon, Ohio passed away peacefully at the home of her daughter, surrounded by her family. She was born October 5, 1929, in Rootstown, Ohio to the late Harry and Anna (Anderson) Dundon. Norma married Curtis Eldridge on November 24, 1952, and he preceded her in death in 2008. The lived in Rootstown for 54 years before moving to Napoleon to be close to her daughters. Norma graduated from Rootstown High School in 1947 and the attended Hiram College. She worked in the Clerk’s office at the Portage County Courthouse for several years. After she took time of the raise her daughters, she began a second career as the Junior High School Secretary for over 20 years. Norma was a people person. She was such a kind and loving lady who had many friends. Norma enjoyed playing the piano and played for the Malinta Methodist Church up until three years ago. She loved music and enjoyed sharing her talents. Norma was also an avid reader. An important part of her life was participating in the Order of the Eastern Star, where she was a 70 year member. He husband, Curtis and she were very active and traveled the district making long lasting friendships along the way. In 1970, Norma was selected to serve as Deputy for her district, which was an honor. Most of all she loved her God and her family. Being with family on any occasion brought her such joy. She was able to make so many memories after moving to Napoleon with her daughters, grandchildren and great grandchildren. Norma has such a strong faith. She showed us this faith and courage especially in the last several months. She knew she would be alright in whatever happens because of her faith. Norma is survived by her daughters, Cindy (Rick) Brechmacher, Brenda (Tim) Zuch; son, Jeffrey (Kathleen) Eldridge; grandchildren, Kevin (Kim) Brechmacher, Jon Eldridge, Katie (Andrew) Young, Ryan (Rose) Brechmacher, Mandi (Justin) Lecklider, Allie (Zak) Foste, and Sami (Gus Hernandez) Zuch. She also leaves behind six great grandchildren and two more on the way. In addition to her parents, she was preceded in death by her husband, Curtis; sister, Phyllis Dundon; and brother, Wayne Dundon. Friends and family will be received at the Rodenberger-Gray Funeral Home, Napoleon on Monday, December 27, 2021, from 2:00 PM until 8:00 Pm with an Eastern Star Service at 7:00 PM. Funeral services will take place at St. John’s United Church of Christ, Holgate, on Tuesday, December 28, 2021, at 11:00 AM with an hour of visitation prior to services. Interment will take place at Homeland Cemetery in Rootstown, OH on Wednesday, December 29, 2021, at 11:30 AM. All are welcome to attend the committal service in Rootstown, OH. Memorial contributions may be made to Rootstown Congregational United Church of Christ, St. John’s United Church of Christ, Holgate, OH or to Bridge Home Health and Hospice, Findlay, OH. We would like to thank Bridge Home Health and Hospice of Findlay for the loving care and support they gave our mom and all of us.

Norma Mae Eldridge, 92, of Napoleon, Ohio passed away peacefully at the home of her daughter, surrounded by her family. She was born October 5, 1929, in Rootstown, Ohio to the late Harry and Anna (Anderson) Dundon. Norma married Curtis Eldridge... View Obituary & Service Information

The family of Norma Mae Eldridge created this Life Tributes page to make it easy to share your memories.

Send flowers to the Eldridge family.