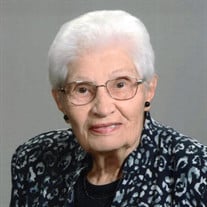 Norma Drewes, 95, of Napoleon, Ohio died peacefully on Sunday, May 23rd, 2021 at Vancrest of Holgate. She was born at home on January 16, 1926 in Richfield Twp., Ohio to the late Albert & Esther (Bremer) Schwiebert. On May 8, 1964, she married Arthur Drewes at Peace Lutheran Church, Deshler, Ohio and he preceded her in death on May 6, 2001. Norma had a hard work ethic. She had worked alongside her husband on the dairy farm for many years. Even when the chores were done, you could find her in her flower beds or finding work to do. She did enjoy a good puzzle now and then. She was also a faithful member of St. Paul’s Lutheran Church, Napoleon Twp. She is survived by a sister, Irene Arps; brother-in-law, Carl Dangler; several nieces and nephews; and a special friend and caretaker, Pam Nicholson. She was preceded in death by siblings, Ray (Margaret) Schwiebert, Mary Ann Dangler, and brother-in-law, Harold Arps. Funeral services will be held at 11 a.m. on Thursday, May 27 at St. Paul’s Lutheran Church, Napoleon Twp. Interment will follow in the church cemetery. A public viewing will be held on Wednesday from 4-7 p.m. at the Rodenberger-Gray Funeral Home, Napoleon and Thursday from 10-11 a.m. at the church. In lieu of flowers memorial contributions are suggested to St. Paul’s Lutheran Church or Putnam County Hospice. Online condolences may be made at www.rodenbergergray.com.

The family of Norma Drewes created this Life Tributes page to make it easy to share your memories.

Send flowers to the Drewes family.