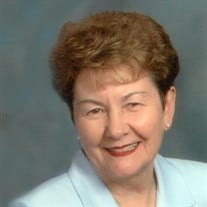 Nancy “Jo” Schwiebert, 82, of Napoleon, Ohio passed away on March 16, 2020. She was born on May 31, 1937 in Tiffin, Ohio to Howard and Thelma (Swander) Kirschner. On January 25, 1959, Jo married Richard Buckham of Mt. Vernon, Ohio at First English Lutheran Church in Tiffin, Ohio. Richard died July 30, 1983. She then married Burdell Schwiebert on August 31, 1990. Jo attended Bowling Green State University and Northwest Community College. She was a secretary most of her life working for; the president at Tiffin Art Metal Company, the administrator of Northwest Visiting Nurses Association, and when she retired in 1992, she was the secretary for the president of Defiance College. After retiring, Jo and Burdell spent the winters in Florida. For several years after returning from Florida in the spring, she worked for Kelly Temporaries and Sauder Manufacturing Company filling in for vacationing secretaries. She was baptized at English Lutheran Church and confirmed there in April of 1950. In 1967 she transferred her membership to St. Paul Lutheran Church in Napoleon, where she held the office of secretary of the congregation, secretary in St. Paul's Ladies Guild, was on the Board of Single Ministry, and taught Sunday School. Jo is survived by her husband, Burdell; children, Brian (Jody) Buckham and Beth (Bill) Hauver; daughter-in-law, Alison Buckham; stepchildren, Scott (Pam) Schwiebert and Pat Schwiebert; step daughter-in-law, Peggy Schwiebert; 7 grandchildren, 12 step-grandchildren and 15 step-great grandchildren. In addition to her parents, she was preceded in death by her first husband, Richard; son, Brad Buckham and stepson, Rick Schwiebert. Friends and family will be received at St. Paul Lutheran Church, Napoleon on Friday, March 20, 2020 from 9:00 am until the time of services at 11:00 am. Interment will follow at Glenwood Cemetery. Due to current health concerns with the Coronavirus, the service will also be livestreamed from the church. Please visit www.stpaulnapoleon.org and scroll down to Live Stream, if you are unable to attend. Memorial contributions may be made to CHP Hospice, 06817 State Route 66N, Defiance, OH 43512 or St. Paul Lutheran Church, 1075 Glenwood Avenue, Napoleon, OH 43545. Online messages and condolences may be shared with the family at rodenbergergray.com.

The family of Nancy Jo Schwiebert created this Life Tributes page to make it easy to share your memories.

Nancy “Jo” Schwiebert, 82, of Napoleon, Ohio passed away on March...

Send flowers to the Schwiebert family.