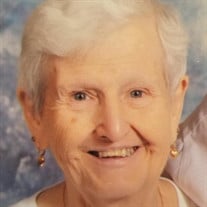 Miriam Janet Lane, 84, of Napoleon, Ohio died peacefully on Tuesday, August 24, 2021 with her daughter Susan by her side. She was born March 31, 1937 in Berrysburg, Pennsylvania to the late Lester and Anne (Potter) Koppenhaver. On December 9, 1955 she married Melvin Lane and he preceded her in death on May 15, 2019. Miriam was a loving mother, a kind friend to all she knew, and caring and compassionate to those in need. She always had luck on her side and won at anything she played including poker and euchre. She had a great sense of humor and over the years she had several close calls with death and wanted it known, “I almost died four times, did die once, and now I’m finally gone!” She was a member of St. Paul Lutheran Church, Napoleon Moose, Eagles, and American Legion Auxiliary. She is survived by her daughter, Susan (Thomas) Lane-Baldwin; daughter-in-law, Rhonda Lane; grandchildren, Jennifer Grubaugh, Nathaniel Lane, Audrey Lane, and Blake Baldwin; great grandchildren, Gavin, Tristan, Connor, Hannah, and Ian; and a brother, Lester (Barbara) Koppenhaver. She was also preceded in death by sons, Melvin, Jr. and Thomas; grandson, Michael Lane; and siblings, Margaret Nice, Erma Miller, and Kenneth Koppenhaver. Funeral services will be held at 12 PM on Monday, August 30th at Rodenberger-Gray Funeral Home, Napoleon, where friends may call from 10am-12 PM. Interment will follow at Forest Hill Cemetery. Memorials may be made to St. Jude’s Children Research Hospital, Shriners Hospital for Children, or the ALS Association. Online condolences may be made at www.rodenbergergray.com

Miriam Janet Lane, 84, of Napoleon, Ohio died peacefully on Tuesday, August 24, 2021 with her daughter Susan by her side. She was born March 31, 1937 in Berrysburg, Pennsylvania to the late Lester and Anne (Potter) Koppenhaver. On December 9,... View Obituary & Service Information

The family of Miriam Lane created this Life Tributes page to make it easy to share your memories.

Send flowers to the Lane family.