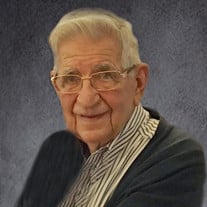 Milford Clinton Rohrbaugh, 90, of Napoleon, Ohio passed away on December 27, 2019. He was born in Defiance County on September 18, 1929 to Julius and Leah (Bickford) Rohrbaugh. He married Darlyn Joyce Fruth on March 31, 1949. Milford played softball for Sharon church in his younger days. He enjoyed woodworking, fishing and camping. Milford’s gardening techniques were one of a kind. He enjoyed watching the Cleveland Indians play, often cheering them on from his armchair with his dogs by is side. He loved his family, especially his grandchildren. Milford is survived by his children, Larry (Sharon) Fruth, Peggy (Ed) Zimmerman, Rob (Susan) Rohrbaugh, Kathy (Roger) Bohn, Andrea (Rich) Kolbe; grandchildren, Scott, Sarah, Rebecca, Rob, Ellen, Jon, Jason, Dana, Riann, Kelly, Adam, Lesa, Cary and Jennifer; 32 great grandchildren, 5 great-great grandchildren; and sister, Phyllis Creager. In addition to his parents, he was preceded in death by his wife, Darlyn Joyce; daughter, Louise “Lucy”; son, Tony and siblings, Homer, Clara French, Clarence, Jessie Clymer, Miriam Detmer, Clyde, Irene Wenner, Pauline Scheele, Bernice Ruffer, Julian, Marilyn Wenner, and Donald. Friends and family will be received at the Rodenberger-Gray Funeral Home, Napoleon on Thursday, January 2, 2020 from 2:00 until 7:00 pm. Funeral services will be held on Friday, January 3, 2020 at 11:00 am at the funeral home with an hour of viewing prior to the service. There will be a private interment at Hoy Cemetery. Memorial contributions may be made to the Hope Lodge or the Henry County Humane Society. Online condolences may be shared with the family at rodenbergergray.com.

The family of Milford Clinton Rohrbaugh created this Life Tributes page to make it easy to share your memories.

Send flowers to the Rohrbaugh family.