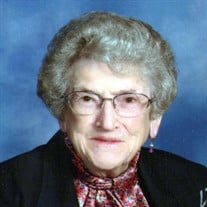 Mildred E. Kistner, 89, of Fort Wayne, IN, formerly of McClure, OH passed away on Tuesday, September 29, 2021 at her home surrounded by her loving and caring family. She was born December 28, 1931 in Cloverdale, OH to the late Walter and Eva (Decker) Shank. She was a 1950 graduate of Damascus Local Schools. She was married to Harold Kistner and he proceeded her in death in 1972. Mildred, also known as Millie worked at Hoffman Egg Produce and Temcole Radish Factory until retirement and then worked part-time for Huddle Farms. She was a faithful member of McClure United Methodist Church, McClure, where she was actively involved in all aspects of the ministry including teaching Sunday school, leading bible study classes, and planning activities held in the fellowship hall. She was a member of the Rebeccah Circle, Emmaus Community, and life member of the McClure American Legion Auxiliary. She loved to Crochet and donated many Afghan lap blankets to the Veteran’s Home in Sandusky over the years. She is survived by her children, David (Susan) Kistner of Fort Wayne, IN, Tresa (John) Rowland of Hamilton, IN, and Ronald Kistner of McClure, OH; 12 grandchildren, 30 great grandchildren and 4 great-great grandchildren; and siblings, Walter Shank, Jr., Jay Shank, Gene (Kathy) Shank, and Betty Joy. She was also preceded in death by a son, Harold “Butch” Kistner, Jr., daughter, Donna Jean Fisher, 2 grandchildren, 2 great grandchildren: and siblings, Lena Brenneman, Charles Shank, Helen Shank, Chester Shank, Lewis Shank, Cora Mineff, Donald Shank, Eva Crawford, and Lowell Shank. Funeral services will be held at 11 am. on Wednesday, October 6th at the McClure United Methodist Church. Interment will follow at Hockman Cemetery. Visitation will be held on Tuesday from 2-8 p.m. at Rodenberger-Gray Funeral Home, Napoleon and Wednesday from 10-11 a.m. at the church. In lieu of flowers, memorials are suggested to McClure United Methodist Church. We would like to express our deep-felt thanks and appreciation to Pat (daughter-in-law) and Chuck Whitman for weeks of constant help and support for Millie.

Mildred E. Kistner, 89, of Fort Wayne, IN, formerly of McClure, OH passed away on Tuesday, September 29, 2021 at her home surrounded by her loving and caring family. She was born December 28, 1931 in Cloverdale, OH to the late Walter and Eva... View Obituary & Service Information

The family of Mildred Kistner created this Life Tributes page to make it easy to share your memories.

Send flowers to the Kistner family.