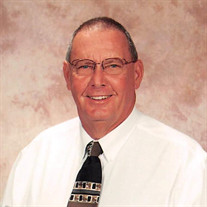 Michael G. Norden, 77, Napoleon, Died September 4th at Promedica Ebeid Hospice Residence, Sylvania, due to complications from Covid-19. Michael was born August 9, 1943 to Carl and Bernice (Wendt) Norden. On April 24, 1964, he married the love of his life, Judy (Elling) Norden, who preceded him in death August 13, 2004. He worked his entire 43 year career at the ITT Higbea Mfg. Company, Archbold/Hisan, Findlay, retiring in 2005. In his spare time, he enjoyed working out in his barn, riding motorcycles, going to the lake, fishing, the Bowling Green Tractor Pulls, and he was an avid motorsports fan. All of which he enjoyed with family and friends. Last but not least, his chocolate milkshakes he had to have every year at the Henry County Fair! Michael is survived by his daughter, Dana (Scott) Olson, Defiance; and son, Matthew (Jen Everley) Norden, Coldwater, MI; 5 grandchildren, Nate & Marisa Olson and Emily, Sara, & Conner Norden; 8 siblings, Marsha (Kenny) Drewes, Terry (Kathy) Norden, Deb (Rick) Katon, Randy (Sandy) Norden, Gwen (Randy) Mekus, Tim (Linda) Norden, Renee (Tim) Roberts and Michelle (Greg) Hornish; and his companion, Vivian Allen. He was also preceded in death by his loving parents. Due to the current Covid-19 Pandemic, there will be a celebration of his life at a later date. Graveside services will be private. Memorial contributions can be made to the American Red Cross, the Filling Home of Mercy, or a charity of the donor’s choice. Memorials may be mailed to Rodenbeger-Gray Funeral Home 1010 Westmoreland Ave. Napoleon, OH 43545. Online condolences may be left for the family at www.rodenbergergray.com

The family of Michael Norden created this Life Tributes page to make it easy to share your memories.

Send flowers to the Norden family.