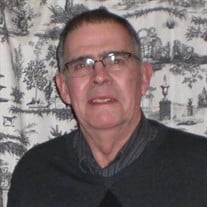 Michael Ray Hurst, 69, of Napoleon, Ohio died Friday, April 22, 2022 at St. Vincent Mercy Hospital, Toledo. He was born August 18, 1952 in Napoleon to Raymond and Dorothy (Shibler) Hurst. On February 16, 1973 he married Susan Hogrefe at Bethlehem Lutheran Church, Okolona. Mike was a 1970 graduate of Tinora High School and served in the United States Army from 1972-1974. He was a carpenter and had worked for Burkholder Construction and Hogrefe Builders. In 1982, he started Mike Hurst Construction. Mike was a lifelong member of St. John Lutheran Church, State Route 6 and 66, where he was a former Trustee. He was a member of the Ridgeville American Legion Post #454 and served as past Post Commander. He is survived by his wife, Susan; children, Jeremy (Jen) Hurst, Carrie (Kent) Stamm, and Rachel Wagner; grandchildren, Travis Wagner, Tyler, Jack, and Kennedy Hurst, and Elena, Moses, and Isaiah Stamm; mother, Dorothy; and siblings; Marsha (Lynn) Bostelman, Steven (Sue Ann) Hurst, Robert “Willie” Hurst, Carl (Pam) Hurst, and a sister-in-law, Becky Hurst. He was preceded in death by his father, Raymond and brother, Roger Hurst. Funeral services will be held at 11 a.m. on Friday, April 29th at St. John Lutheran Church, State Route 6 and 66. Interment will follow at the church cemetery, where military honors will be accorded by the Ridgeville American Legion. Visitation will be held at the church on Thursday from 3-8 p.m. and Friday from 10-11 a.m. In lieu of flowers and gifts, memorials are suggested to St. John Lutheran Church or Hospice of Northwest Ohio.

The family of Michael Ray Hurst created this Life Tributes page to make it easy to share your memories.

Send flowers to the Hurst family.