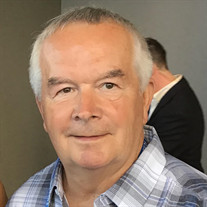 Not sure what to send?

*SERVICE UPDATE* Please join the family of Michael A Hoops, Malinta, for a memorial service and celebration of his life on Saturday, May 21 at St. Paul Lutheran Church - Flatrock Township, Co. Rd. K, Napoleon, Ohio. Visitation will be held from 1-3 p.m. followed by a service at 3 p.m. A graveside service will be held immediately following in the same location at St. Paul’s cemetery. Mike passed away on January 12, 2022. Michael Alan Hoops, 68, of Malinta, Ohio, went home to his Heavenly Father on Wednesday, January 12. He was born on July 31, 1953, to Paul and Thelma (Rentz) Hoops, Hamler. Mike married Lynn (Hahn) Hoops of Malinta on October 13, 1973. Mike graduated from Patrick Henry High School in May of 1971 and completed the apprenticeship program of the International Brotherhood of Electrical Workers, Local 8, Toledo. He was a Union Electrician for approximately 40 years. He was also a member of the NEBF. Mike’s faith was always a big part of his life. He served on church council, sang in the choir and enjoyed team dart ball and bowling with congregation friends. He was a member of St. Paul Lutheran Church, Flatrock Twp., Maumee Valley Sportsman Club and a Patriot Life Member of the NRA. In his younger years he was a Boy Scout, followed by being a Scout Leader for Troop 262, Hamler, where he proudly assisted both of his sons in becoming Eagle Scouts. He traveled with his wife and family on many memorable trips, including Costa Rica, London, Florida and Myrtle Beach. He went on grouse hunting trips with good friends and was an avid reader, with his favorite author being Stephen King. He loved multiple generations of faithful “Hoops” dogs (and put up with one cat, one pig and a few other experimental pets). He raised his children to appreciate vinyl records, 70s rock, a strong work ethic and good sarcasm. He unsuccessfully played basketball in cowboy boots. He was also a diehard Bigfoot enthusiast (he is out there). Mike is remembered by his loving wife Lynn and their three children, who he was so incredibly proud of: Andrew (Christi) Hoops, grandchildren Ava and Jacob, Brighton, Michigan; Timothy (Norma) Hoops, grandchildren Paxton and Hudson, Avon, Ohio; and Beth (Stephen Shuman) Hoops of St. Louis, Missouri. He is survived by siblings David (Laurie) Hoops, Montrose, Colorado; Steve (Cyndy) Hoops, Englewood, Florida; and Holli Sirianni, New Hope, Pennsylvania; with many nieces and nephews. He was preceded in death by his parents, Paul and Thelma Hoops, Englewood, Florida. Memorial contributions may be made to Henry County Dog Shelter, The Gideons International, Parkinson’s Foundation or the donor’s choice. Masks will be required for attendance and will be provided by the family for those who do not have one.

*SERVICE UPDATE* Please join the family of Michael A Hoops, Malinta, for a memorial service and celebration of his life on Saturday, May 21 at St. Paul Lutheran Church - Flatrock Township, Co. Rd. K, Napoleon, Ohio. Visitation will be held from... View Obituary & Service Information

The family of Michael Hoops created this Life Tributes page to make it easy to share your memories.