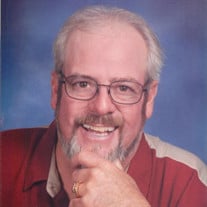 Michael (Mike) D. Clark, 60, beloved husband, father, and grandfather, passed away peacefully on Saturday, April 10, 2021, in Toledo Hospital surrounded by his family. Mike was born on January 14, 1961, to Dean and Evelyn (Hancock) Clark, in Bryan. He was raised in Stryker and a member of the First Baptist Church. Mike graduated from Stryker High School in 1979. Mike married Jackie Brown on October 4, 1986, in The United Methodist Church in McClure, OH. He was a devoted father to their two sons, whom he was so proud of, Christopher (Angela Cline) Grant and Caleb Clark. His greatest joy here on earth were his granddaughters, Elizabeth Clark and Clara Clark, Nina Cline and Sydney Cline, who survive. Mike is survived by his sisters, Cindy (Jon) Diller and Jaimie (Jim) Hildabrandt, cousins, Clarke (Brad) and Christine Bailey, mother-in-law, Carole Brown and friend, Duane Kerwin, brothers and sisters in-law, Rex and Lynn Brown, Johnny Brown and Marsha Cassilas, Keith and Jocelyn Talbot, and many nieces and nephews and great nieces and nephews, who were all very special to him. He was preceded in death by his parents, Dean and Evelyn, and great nephew, Jaxon Palmer, and father in-law, Robert Brown. Mike worked as a Block and Brick Mason, out of the Toledo Local 3 Union. He loved his trade and worked on many buildings and projects around Ohio and Michigan. Even after having to retire in 2003, due to illness (Pulmonary Arterial Hypertension), he continued lifelong friendships with his co-workers. Getting together to fish on Lake Erie, hunt in Pennsylvania, or meeting for breakfast. He had many hobbies including, hunting, fishing, watching his kids at sporting events and the Green Bay Packers, metal detecting, forging knives and leather sheaths, woodworking projects and spending time with family and friends. Mike never met a stranger. Honoring his wishes, Mike’s body was donated to The University of Toledo College of Medicine Anatomical Donation Program. The family would like to thank the 5th Floor CICU Doctors and Nurses at Toledo Hospital for their incredible care of “Uncle Mike.” (What they called him.) We will be forever grateful. A Memorial Service for family and friends will be held at the Rodenberger-Gray Funeral Home, 310 Frank St. McClure, OH. on Saturday, April 24, 2021, at 12:00 Noon, with visitation 2 hours prior to the service. For those planning a Memorial contribution in Mike’s Honor, please consider Damascus Twp. Fire and Rescue, where he served for ten years or The McClure United Methodist Church.

The family of Michael Clark created this Life Tributes page to make it easy to share your memories.

Send flowers to the Clark family.