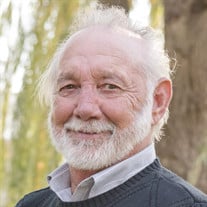 Maurice “Sam” Rice, 73, of Wauseon, Ohio died Tuesday, February 23, 2021 at St. Luke’s Hospital. He was born September 19, 1947 in Napoleon, Ohio to the late Wilbur “Pete” and Lavon (Gilliland) Rice. Maurice was given the nickname of “Sam” by a neighbor man at a young age and from that point on that was what everyone called him. Sam attended the Malinta-Grelton school and attained his GED in the Army. He served in the United States Army from 1967-1969, spending one year in Ft. Knox and one year in Alaska. On July 8, 1967 he married Virginia (Elling) Rice at St. Paul Lutheran Church, Liberty Center. Since the age of 15 Sam was a born mechanic. He worked for Snyder Chevrolet, Napoleon, Roger Miller Ford, Wagner Motors, Turnpike Travelers, and Lammon Motorcycles in Wauseon where he became known as “Honda Sam”. In 1982, Sam ventured out on his own and started Rice Repair, working on motorcycles, cars, and small trucks. Sam liked the challenge and would try to fix anything. Sometimes you would see boats, farm tractors and even lawn mowers at the shop. Sam loved camping along the Maumee river in the summertime, where he enjoyed fishing to catch that elusive big fish. He was also a NASCAR enthusiast. He was a lifelong member of the VFW Post 7424, Wauseon. Sam was a jokester and always had a story to tell. He was also a prankster, and no one was safe when he was around. Whether he was throwing smoke bombs, yelling “Fire!” or tossing something stinky in the back of some one’s pickup truck or even hooking up your brake lights to your horn so when you turned a corner your horn would blow. He loved life and lived each day to the fullest. Sam will be missed by his wife, Virginia; sons, Tim (Jackie) Rice and Todd (Amy) Rice; grandchildren, Dalton, Alexi (Andy Parish), and Ava; Great Grandchildren, Gabby, A.J., and Leesy Parish; siblings, Judy (Don) Terwilliger, Karen (Bob) Gibbs, Alma Hartman, and sister-in-law, Pam Rice. He was also preceded in death by a granddaughter, Haley Rice; siblings, Chuck and Frank Rice; and brother-in-law, Fritz Hartman. A public viewing will be held on Sunday, February 28th from 1-6 p.m. at Rodenberger-Gray Funeral Home, Napoleon. Funeral services will be held at 11 a.m. on Monday at the funeral home. Masks and social distancing will be required. Interment will follow in Wauseon Union Cemetery where military rites will be accorded. Memorial contributions are suggested to Wauseon Fire Department or the Fulton County Senior Center. Online condolences may be made at www.rodenbergergray.com

The family of Maurice "Sam" Rice created this Life Tributes page to make it easy to share your memories.

Send flowers to the Rice family.