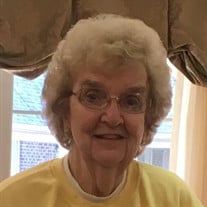 Mary Lou, age 85, beloved sweetheart and wife of Jerry, passed away peacefully on Saturday, November 30, 2019 with her family by her side, after a tenacious struggle to overcome complications from surgery. Mary Lou was born to parents Hugo and Naomi Saneholtz in 1934. Mary Lou leaves behind the husband she loved for 65 years, Jerry, three children Doug (Vickie) Palmer of Powell, OH, Joan (Todd) Meyer of Maumee, OH, and Todd Palmer of Greensboro, NC; grandchildren, Brianne (Jason) Kramer, Amanda (Antione) Drakeford, Tom (Rachel) Palmer, Maggie and Molly Palmer; great-grandchildren, Ava and Emma Kramer, Winston and Wyatt Drakeford. She also leaves a brother-in-law Robert Masters, two sisters-in-law Bernetta Saneholtz and Nancy Saneholtz and numerous nieces and nephews. In addition to her parents, Mary Lou was preceded in death by sister Lavon and brother-in-law Perry Tucker, brother Wilber and sister-in-law Grace Saneholtz, brother Orville Saneholtz, sister Damaris Saneholtz, sister Ardith Masters, brother Norris “Tony” and sister-in-law Paula Jean Saneholtz, brother Paul Saneholtz, sister Lois and brother-in-law Merl Bauman. After Mary Lou graduated from Liberty Center High School in 1952, she worked as the bookkeeper for Snyder Appliance Center for a short period of time before beginning her career at Campbell Soup Company. While working at Campbell Soup Company, Mary Lou began as a secretary and ended her career as the administrative assistant for the senior purchasing agent. Mary Lou also worked at the Henry County Clerk of Courts Title Department for many years. One of her greatest joys was being a busy homemaker and helping alongside her husband on the family farm. She enjoyed driving the tractors and grain trucks and completing any task to get the job done well. Mary Lou had a great appreciation for Mother Nature and all of God’s creatures. She was a member of Sharon United Methodist Church. In her free time, Mary Lou enjoyed baking, sewing, reading, flower gardening, and creating and sending beautiful handmade greeting cards. She will be remembered for her quick wit, her great sense of humor, her sweet, kind spirit, her gentle, nurturing presence and her endless supply of selflessness. She lived her life being a hardworking, compassionate person setting a wonderful example for everyone around her. She was an exceptional individual who will be dearly missed. Family and friends will be received at the Rodenberger–Gray Funeral Home, 1010 Westmoreland Ave., Napoleon, OH from 2 to 8 P.M. on Friday, December 6 and from 10 to 11 A.M. on Saturday, December 7. Funeral services will be held at the Rodenberger-Gray Funeral Home on Saturday, December 7 at 11:00 A.M. Interment will follow at Grelton Cemetery. In Lieu of flowers, contributions can be made to Henry County Humane Society or Sharon United Methodist church.

Mary Lou, age 85, beloved sweetheart and wife of Jerry, passed away peacefully on Saturday, November 30, 2019 with her family by her side, after a tenacious struggle to overcome complications from surgery. Mary Lou was born to parents Hugo... View Obituary & Service Information

The family of Mary Lou Palmer created this Life Tributes page to make it easy to share your memories.

Send flowers to the Palmer family.