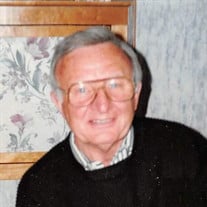 Marvin “Pep” Raymond Weaver passed away early Wednesday morning on October 23, 2019 at Northcrest Nursing Home. He was born on March 14, 1931 in Napoleon, Ohio; the only son of Raymond and Ida (Schwab) Weaver. He married Sally (Bernicke) Weaver on December 18, 1955 at the First Presbyterian Church in Napoleon, Ohio and she survives. They were happily married for 64 years. Pep graduated from Napoleon High School in 1950 and kept many of his classmates as friends through the years. He attended Bowling green State University until he left college to enlist in the United States Navy during the Korean Conflict. He graduated Great Lakes Training School as a certified typewriter and gauge technician. He served aboard the USS Arcadia stationed in the Mediterranean Sea during his tour of duty. After his discharge from the service he took over the Standard Oil Distributor job from his father. He delivered Sohio products to farmers, service stations, and commercial businesses. After more than 35 years working at a job he loved, he retired to work at Patton Pontiac and Bernicke Super Valu. Pep had a lifelong love of horses and enjoyed many vacation trips going horseback riding. He loved spending time with his family, especially at the cottage at Merry Lake. He also loved walking his dog on the tow path by the Maumee river. Pep is survived by his wife, Sally; sons, Timothy (Jean) Weaver, Thomas (Karen) Weaver, and daughter Bethany (Bret) Dennis. He is also survived by 8 grandchildren, Brad (Nicole) Weaver, John Weaver, Sara Weaver, Megan (Kurtis) Burnett, Steven Weaver, Scott Dennis, Todd Dennis, and Nicole Weaver; and 3 great grandchildren, Amelia Weaver, Madison Burnett and Brooke Burnett. Preceding him in death were his parents; two sisters, Lucille (Eugene) Mann, and Dorothy (Robert) Meyer. Pep was a member of the First Presbyterian Church, the Bert G Taylor Post 300 of the American Legion, the Napoleon Booster Club, and the Napoleon Athletic Hall of Fame. Funeral services will be held on Saturday, October 26th, 2019 at 11 a.m. at the First Presbyterian Church, Napoleon. A private interment will be held later that day at Forest Hill Cemetery, where military honors will be accorded by the Napoleon Joint Veteran Posts. Visitation will be held on Friday from 3-7 p.m. at Rodenberger-Gray Funeral Home, Napoleon and Saturday from 10-11 a.m. at the church. Memorials can be made to First Presbyterian Church or the Napoleon Athletic Hall of Fame.

Marvin &#8220;Pep&#8221; Raymond Weaver passed away early Wednesday morning on October 23, 2019 at Northcrest Nursing Home. He was born on March 14, 1931 in Napoleon, Ohio; the only son of Raymond and Ida (Schwab) Weaver. He married Sally (Bernicke)... View Obituary & Service Information

The family of Marvin "Pep" Weaver created this Life Tributes page to make it easy to share your memories.

Send flowers to the Weaver family.