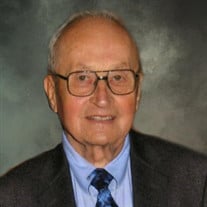 Marvin H. Gebers , 86, of rural Defiance, Ohio passed away on Saturday, April 16, 2022 at CHP Hospice in Defiance. He was born on February 21, 1936 in Henry County to Carl and Emma (Sonnenberg) Gebers. Marv was united in marriage to Shirley Huber on September 21, 1958. He retired in 2001 after 34 years as a fuel distributor for Marathon Products. Marv was a member of the Ohio Army National Guard from 1958 – 1964. He was a member of Bethlehem Lutheran Church near Okolona where he served as a Deacon, Trustee and was on the cemetery committee. Marv in survived by his loving wife of 63 years, Shirley; five children, Deb (Jeff) Peter of Hicksville, Darwin (Gwen) of Holgate, Cindy (Ken) Bennett of Napoleon, Craig (Mary Pat) of Sylvania and David (Martha) of Wauseon. He is also survived by 10 grandchildren, Zach (Michele) Fruth, Alex (Danica Matuska) Gebers, Jacob (Mackensey) Gebers, Austin (Sarah Kersjes) Gebers, Ryan Gebers, Mallory (Courtney Drew) Gebers, Evan Gebers, Catie Gebers, Vivian Gebers and Owen Gebers; 3 great grandchildren; and niece, Brenda Palm. He was preceded in death by his parents; and sister, Arleta (Henry) Oberhaus. Family and friends will be received at the Rodenberger-Gray Funeral Home, Napoleon, on Friday, April 22, 2022 from 2:00 PM until 8:00 PM. Funeral Services will be held at Bethlehem Lutheran Church, Okolona, on Saturday, April 23, 2022 at 11:00 AM with an hour of visitation prior to services. Interment will follow at the church cemetery. Memorial contributions may be made to Bethlehem Lutheran Church, CHP Hospice Center or to the Jewell Fire Department. Online condolences may be shared with the family at rodenbergergray.com. A heartfelt thanks to all the staff at Northcrest for taking good care of Marv and a special thanks to the staff of CHP hospice of Defiance for their comforting care.

Marvin H. Gebers , 86, of rural Defiance, Ohio passed away on Saturday, April 16, 2022 at CHP Hospice in Defiance. He was born on February 21, 1936 in Henry County to Carl and Emma (Sonnenberg) Gebers. Marv was united in marriage to Shirley... View Obituary & Service Information

The family of Marvin Herman Gebers created this Life Tributes page to make it easy to share your memories.

Send flowers to the Gebers family.