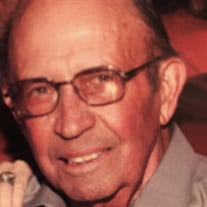 Marvin L. Dickmann, 85, of Napoleon, Ohio passed peacefully and went to his heavenly home on Thursday, March 31, 2022 at the Napoleon Lutheran Home- Genacross. He was born April 27, 1936 in rural Liberty Center, Ohio at his childhood home to the late Louis and Emelia (Kruse) Dickmann. On August 22, 1959, he married Judy Groll at St. Paul Lutheran Church, Napoleon, Ohio. Marv was a 1954 graduate of Liberty Center High School. He helped on the family farm as a kid and worked at Hayes Bowling Alley setting bowling pins, and then drove truck for the 7-UP bottling company. He started work at C.F. Gerken in 1959, Gerken Construction in the 1970’s and Gerken Paving until he retired in 2000. He also helped on the farm in the 70’s and 80’s. Marv served in the U.S. National Guard and was transferred to the U.S. Army and was discharged in 1964. Marv was also a member of the Ridgeville American Legion and former volunteer fireman for Flatrock Twp. Fire Department. He enjoyed tinkering in his barn and mowing his yard. He is survived by his loving wife, Judy; children, Jeff (Kim) Dickmann of Napoleon, Matt (Kelly) Dickmann of Marietta, Georgia, and Jamy (Monty) Sullivan of Grapevine, Texas; grandchildren, Nathan (Bailey Short-Dickmann) Dickmann, Jaycie Dickmann, Kylie Dickmann, Blake Sullivan, Heather (Anthony) Harrison, and Chris Eis; great grandchildren, Asher Dickmann and Daja Harrision; brother, Eldon (Marie) Dickmann, and sister-in-law, Marian Dickmann. He was also preceded in death by a brother, Donald Dickmann. Funeral services will be held at 10:30 a.m. on Monday, April 4th at St. Paul Lutheran Church, Napoleon. Interment will follow at Riverview Memory Gardens, Defiance, where military honors will be accorded by Ridgeville American Legion. Visitation will be held on Sunday from 1 – 5 p.m. at Rodenberger-Gray Funeral Home, Napoleon, and Monday from 9:30 – 10:30 a.m. at the church. In lieu of flowers and gifts, memorial contributions may be made to St. Paul Lutheran School Library or Henry County Humane Society. Online condolences may be left for the family at www.rodenbergergray.com.

Marvin L. Dickmann, 85, of Napoleon, Ohio passed peacefully and went to his heavenly home on Thursday, March 31, 2022 at the Napoleon Lutheran Home- Genacross. He was born April 27, 1936 in rural Liberty Center, Ohio at his childhood home to... View Obituary & Service Information

The family of Marvin L. Dickmann created this Life Tributes page to make it easy to share your memories.

Send flowers to the Dickmann family.