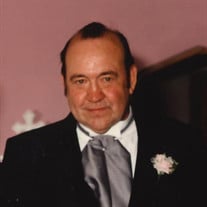 Marvin Frederick Biederstedt, 85, of Malinta, Ohio passed away on Monday, June 7, 2021, surrounded by his family. He was born in Napoleon Township on March 21, 1936, to Arnold and Luetta (Plassman) Biederstedt. He married Judith Ann Harman on May 13, 1962. Marv was an active member of Trinity Lutheran Church, Malinta, where he served on the church council, baseball and dartball teams. He was one of the founding members of the Malinta Park Committee. Marv served his country in the US Army Reserves and was a member of the Napoleon American Legion. He was a lifelong supporter of Patrick Henry Athletics and loved following all his grandchildren’s school activities. Marv also enjoyed golfing, playing cards and spending time with his family at the lake. He is survived by his loving wife of 59 years, Judy; children, Sherry Shenkman, Darvin (Sarah) Biederstedt, and Edward (Tiffany) Biederstedt; grandchildren, Josh (Jodi) Biederstedt, Emella “Anna” (Chad) Pittman, Blake (Julie) Biederstedt, Alexandria Biederstedt, Jacob Willford, and Andrew (Kara Reigle) Willford; great grandchildren, Lane Biederstedt, Aden Biederstedt, Owen Biederstedt, and Stella Pittman; brother, Dan (Pam) Biederstedt and sister, Betty Ann Biederstedt. In addition to his parents, he was preceded in death by his son, David and son-in-law, Hyman Shenkman. Friends and family will be received at the Rodenberger-Gray Funeral Home, Napoleon on Thursday, June 10, 2021, from 4:00 PM until 8:00 PM. Funeral services will be held at the funeral home on Friday, June 11, 2021, at 11:00 AM with an hour of viewing prior to services. Interment with military honors will follow at Hoy Cemetery, Napoleon. Memorial contributions may be made to Trinity Lutheran Church, Malinta. Online condolences and messages may be shared with the family at rodenbergergray.com.

Marvin Frederick Biederstedt, 85, of Malinta, Ohio passed away on Monday, June 7, 2021, surrounded by his family. He was born in Napoleon Township on March 21, 1936, to Arnold and Luetta (Plassman) Biederstedt. He married Judith Ann Harman on... View Obituary & Service Information

The family of Marvin Frederick Biederstedt created this Life Tributes page to make it easy to share your memories.

Send flowers to the Biederstedt family.