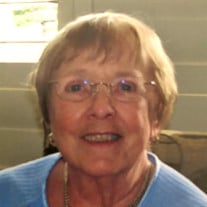 Marjy Lou (Walters) Snyder, 92, formerly of Napoleon, died peacefully on Tuesday, October 22nd, 2019. Marjy was born in Napoleon, Ohio on December 8, 1926 to the late Thomas and Helen Lenora (Tuttle) Walters. On May 2, 1948, she married Charles “Chuck” Snyder at St. Paul Methodist Church, Napoleon and he preceded her in death on September 11, 2007. Marjy graduated from Napoleon High School and then attended Bowling Green State University. After marrying Chuck, she became a homemaker with a flair for entertaining. She was a devoted mother and grandmother who loved spoiling guests at her house in Napoleon and vacation homes in Devils Lake, Michigan and Naples, Florida. She was a former member of St. Paul Methodist Church, Napoleon and North Naples Church, where she helped in the office. She enjoyed playing golf and tennis and loved to shop! She is survived by her sons, Charles David (Michelle) Snyder, John Steven Snyder; 14 grandchildren; and 10 great grandchildren. She was also preceded in death by siblings, Harold, Howard, Russell, Marietta, and Cleo. A private graveside service was held at Glenwood Cemetery, Napoleon, Ohio. Memorials may be made in honor of Marjy to Napoleon Public Library 310 West Clinton St. Napoleon, Ohio 43545. Online condolences may be made at www.rodenbergergray.com

The family of Marjy Lou Snyder created this Life Tributes page to make it easy to share your memories.

Send flowers to the Snyder family.