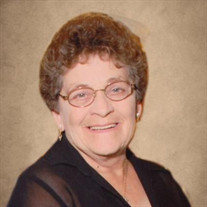 Marjorie L. Tussinger, 84, of Liberty Center, Ohio went Home to be with the Lord and Savior, January 13th, 2021 at St. Vincent Mercy Medical Center. She was born July 15, 1936 in Napoleon, Ohio to the late Donald Bost Sr & Florence (Smith) Ludeman. She was a loving wife, mother, grandmother, and great grandmother (Grandma “T”). She attended the Liberty Center United Methodist Church, Liberty Center. Her faith in the Lord and her family were the foundation of her life. She had a passion for sports, especially her Liberty Center Tigers. With 4 sons and her grandsons she never missed a football game. She also shared a love for The Ohio State Buckeyes and Pittsburgh Steelers and those that knew her knew never to call her nor talk to her during a game. That passion carried over to her grandchildren, supporting them in their sports and teaching them strong values about respect and commitment. Marge was a strong, hard working woman that dedicated her life to her family. She was always thinking of others first and carried that same strength till her final days. Not to forget, she was also a proud card-carrying member of the Buckeye State Sheriff’s Association. On November 28th, 1969, she married Harry “Abe” Tussinger and together they raised 10 children. Marge always had an open door to any of their friends and accepted them as one of her own. As if 10 was not enough! In addition to her husband of 50 years, Marge is survived by her children, Jim (Deb) Bodenbender, Cheryl (Greg) Beck, Mike (Janet) Bodenbender, Todd (Kelly) Bodenbender, and Terry (Teresa) Bodenbender; stepdaughters, Tammy (Bobby) Franz, Beth (Robert) Deleon, Glenda (Steven) Kampton; and sister, Jeanette Banks. Her love did not stop there, she so loved her 25 grandchildren and 36 great grandchildren. Marge was also preceded in death by a daughter, Kathy (Bodenbender) Rutter; stepson, Todd Tussinger; brothers, Don, Jr., Tom, and Joe Bost; sister, Rose Glass; and great grandchildren, Faith, Grace, and Thomas Gerken. A public visitation will be held on Wednesday, January 20th from 2-8 p.m. at Rodenberger-Gray Funeral Home, Napoleon. A private funeral service will be held on Thursday at the funeral home. A Public Graveside service will be held on Thursday at 12:30 p.m. at Hoy Cemetery, located close to corner of State Route 6 and State Route 109. Masks and social distancing will be observed. In lieu of flowers, memorial contributions are suggested to St. Jude’s Children Hospital, Shriner’s Hospital, or National MS Society. Online condolences may be made at www.rodenbergergray.com.

The family of Marjorie L Tussinger created this Life Tributes page to make it easy to share your memories.

Send flowers to the Tussinger family.