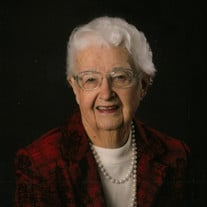 Marilyn A. Leaders of Napoleon, Ohio met her Heavenly Father on April 7, 2022. She was born December 1, 1927 to Clarence and Freda (Armbruster) Huddle. She was baptized by Rev. F.J. Lankenau and confirmed by Rev. Martin J. Zschoche in St. Paul Lutheran Church, Napoleon. She attended the Spangler country school and later Napoleon City Schools, graduating in 1945 as class salutatorian. She married Lawrence C. Leaders of Holgate on January 17, 1948 in St. Paul Lutheran Church, Napoleon. He preceded her in death in 2006. Her greatest joy was her family. She is survived by her children, Karen (special friend, Roger Rex) Steiner, Defiance, and Janet (Allen) Shutt, Tiffin; Kevin (Evie) Leaders, Napoleon; and Marsha (fiancé, Gary Cousin) Leaders, Derwood, Maryland; grandchildren, Brad (Kristin) Leaders, Napoleon; Kristi Leaders, Napoleon; Eliot Sasaki, Washington, D.C.; and Alex Sasaki, Tucson, Arizona; and great grandchildren, Jacob and Addison Leaders, Napoleon. She is also survived by brothers, Herb Huddle and Jay (Phoebe) Huddle, of Napoleon. In addition to her parents and husband, she was preceded in death by her brother, Dwight Huddle, and sisters-in-law, Hazel Huddle, Norma Huddle and Betty Huddle; and son-in-law Ron Steiner. She was a faithful member of St. Peter Lutheran Church, Florida, Ohio. She was a 50-year member of the Gerken-Hurd American Legion Auxiliary 654, Florida, for which she wrote a history of the post which disbanded in 1986, and the Bert G. Taylor American Auxiliary, a member and past regent of the Elijah Gunn Sr. Chapter DAR, a blood mobile volunteer for many years, a Cub Scout den mother, past member of the Henry County Historical Society and the Hottel-Keller Memorial, Inc. of Virginia. Marilyn was an avid reader and enjoyed genealogy, cross word puzzles, and filling the pages of many photo and family scrapbooks, which she called her archives. When she married Lawrence, she became a farmer's wife and was a vital part of the farming operating, helping on the family farm into her nineties. She was a loving and devoted caregiver for her parents and elderly aunts and uncles. In her thoughtful and caring ways, she touched many lives over the years. Funeral services will be held at 11 a.m. on Monday, April 11, 2022, at St. Peter Lutheran Church, Florida, with Pastor Jacob Stuenkel officiating. Visitation will be two hours prior to the service. Interment will be at Riverview Memorial Gardens, Defiance. In lieu of flowers, memorials may be given to St. Peter Lutheran Church, The Gideons International or a charity of the donor's choice. Online condolences may be shared with the family at rodenbergergray.com.

Marilyn A. Leaders of Napoleon, Ohio met her Heavenly Father on April 7, 2022. She was born December 1, 1927 to Clarence and Freda (Armbruster) Huddle. She was baptized by Rev. F.J. Lankenau and confirmed by Rev. Martin J. Zschoche in St. Paul... View Obituary & Service Information

The family of Marilyn A. Leaders created this Life Tributes page to make it easy to share your memories.

Marilyn A. Leaders of Napoleon, Ohio met her Heavenly Father...

Send flowers to the Leaders family.