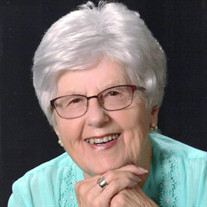 Marilyn Mae Cameron, 91, of Ridgeville Corners, Ohio died peacefully on Saturday, January 23, 2021 at her residence surrounded by her family. She was born May 31, 1929 in McClure, Ohio to the late Albert & Caroline (Glore) Keller. On January 4, 1948, she married Richard Cameron, Jr. at Emanuel Lutheran Church, Napoleon, and he preceded her in death on March 1, 1997. Marilyn was a homemaker and worked at Dinner Bell, retiring in 1987. She was a faithful member of St. Paul’s Lutheran Church, Napoleon Twp., where she was a member of the Women of Life. She was also a member of Ridgeville Twp. Fire Department Women’s Auxiliary. She helped distribute the Ridgeville Newsletter and enjoyed camping and fishing in her younger years. She was fond of line dancing and attended class at Henry County Senior Center till she was 88. She loved to spend time with her family and see all her grandchildren and great grandchildren. She is survived by her children, Judith Welker, William (Linda) Cameron, Brenda (Fred) Rathge, and Vicki (Butch) Heller; grandchildren, Thaddeus Welker (Sharissa), Jordan Welker, Jamie (David) Erikson, Julie Cameron (Gary Grigsby) Phillip (Emily) Rathge, Rachel (Korey) Walz, Nathan Heller and Lee Heller; and 13 great grandchildren. She was also preceded in death by a daughter, Karen Cameron; brothers, Eldon and Keith Keller, and an infant sister, Diane Keller. Funeral services will be held at 11 a.m. on Wednesday, January 27th at St. Paul’s Lutheran Church, Napoleon Twp., Ohio with visitation from 10-11 a.m. Interment will follow at St. Peter Lutheran Cemetery, Ridgeville Corners, Ohio. In lieu of flowers, memorials may be given to Ridgeville Fire Department, St. Paul’s Lutheran Church, Napoleon Twp., or CHP Defiance Hospice.

Marilyn Mae Cameron, 91, of Ridgeville Corners, Ohio died peacefully on Saturday, January 23, 2021 at her residence surrounded by her family. She was born May 31, 1929 in McClure, Ohio to the late Albert & Caroline (Glore) Keller. On January... View Obituary & Service Information

The family of Marilyn Cameron created this Life Tributes page to make it easy to share your memories.

Send flowers to the Cameron family.