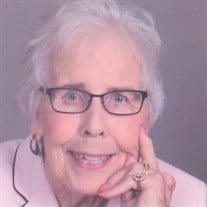 Margarete Louise Lanzer, 93, of Napoleon, Ohio died peacefully on Friday, March 18th, 2022 surrounded by family. She was born August 29, 1928 in Napoleon Twp. to the late Ferdinand & Mathilda (Badenhop) Norden. On April 11, 1948 she was married to Melvin Walter Lanzer at St. Paul Lutheran Church, Napoleon Twp., who preceded her in death on May 12, 2014. Marge was baptized on September 16, 1928 and confirmed on March 29, 1942 at St Paul’s. She continued to be very active at Emanuel Lutheran church by volunteering as a Sunday School teacher and helping in a variety of roles for “Women of the Church”. She used her talents and enjoyed sewing for Filling Home of Mercy. She also enjoyed her cards; playing pinochle, pepper, and bridge with her many friends and family. Being the fun-loving person she was, April Fools day was one of her favorite holidays and people knew to avoid her on that day. Her homemade potato salad and coffee cake were enjoyed by those who loved her. She is survived by her children Cheryl Huffman, Vanessa Lanzer, Charlotte (Tom) Zgela, and Matt (Toni) Lanzer and was preceded in death by a daughter Deborah. Also left to cherish her memory are grandchildren Jonathan (Jessica) Huffman, Nicole (Andrew) Hamons, Lyndsey (John) Lucas, Megan (Andy) Rice, and Senna, Tara, and Damian Lanzer; great grandchildren Natalie, Deklan, Mason, Saylor, and Charli; and siblings Gladys Dachenhaus and Daniel (Toni) Norden. She was also preceded in death by son-in-law Joe Huffman; and siblings Florence Behnfeldt, Mary Ann Iliff, Leonard Norden, and Rev. Norman Norden. Funeral services will be held at 11 a.m. on Saturday, March 26 at Emanuel Lutheran Church, Napoleon. Interment will follow at Glenwood Cemetery. Visitation will be held on Friday from 3 – 7 p.m. at Rodenberger-Gray Funeral Home, Napoleon and Saturday from 10-11 a.m. at the church. In lieu of flowers and gifts, memorials may be directed to Hope Services Foundation, Filling Home of Mercy, or Emanuel Lutheran Church. Online condolences may be left for the family at www.rodenbergergray.com

The family of Margarete Lanzer created this Life Tributes page to make it easy to share your memories.

Send flowers to the Lanzer family.